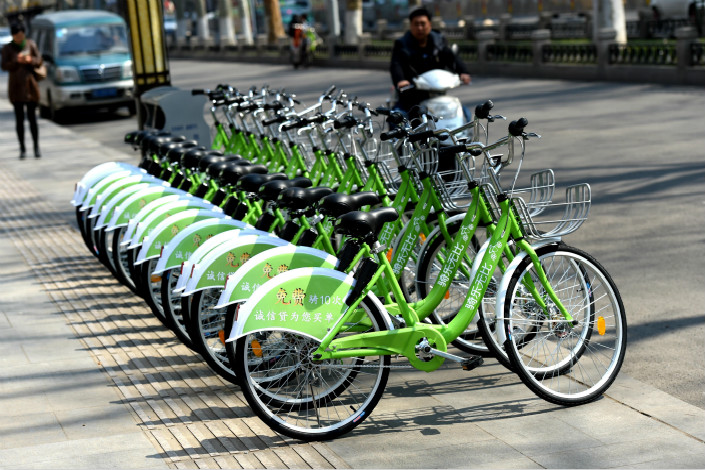 Coolqi admitted in a Weibo post that they had let down the users of their bikes (pictured), but said that they “haven’t given up" and are "talking with funding sources and looking for support and guidance from the government.” Photo: IC

A hotshot startup that tried to impress with its flashy gold and earth-friendly green bicycles has sacked its chief, the latest sign it may soon join a growing pileup of failed bike-sharing specialists.

Coolqi announced the departure of founder and CEO Gao Weiwei in a post on its official account on Weibo, China’s equivalent of Twitter, citing his “inadequate management ability.” It added the company is moving quickly to assemble a new management team.

“At this time, we earnestly ask that our many users and other members of society give Coolqi some time to stand up once again, time to repay deposits to users and to continue serving people who want to keep using the service,” the company said in the post.

It also apologized both to its users and employees.

“We have let you down,” it said. “For the bad influence we’ve created in society, we also apologize, and thank employees and users for the trust they’ve shown in Coolqi.”

The company was just one of many smaller players to jump on the shared bike phenomenon that began sweeping China more than a year ago, using smartphone-based technology to usher in a new generation of services that let users unlock and park bikes anywhere they find them. Based in Beijing, Coolqi lists 16 other offices on its website in provinces and major cities across China.

The company made a name for itself with its flashy gold bicycles with blue seats and tire rims, mimicking others in the crowded space by trying to set itself apart with distinctive colors and bike designs. Its other design was light green bikes, part of the environmentally-friendly image it tried to cultivate. One of the sector’s largest players, Mobike, is known for its orange and gray bikes with new-age wheel designs, while major rival Ofo is known for its canary-yellow bikes.

But following the breakneck expansion, the sector has become overheated, and has also created controversy by cluttering up big city streets and sidewalks with millions of idle bikes.

Coolqi started making headlines in August when media outlets first started reporting that it wasn’t refunding some of the deposits that all users pay when they first sign up for service. Later reports said the company’s offices were mostly vacant, leading many to speculate it was in danger of collapse.

In its latest microblog post, Coolqi acknowledged that the process of refunding deposits had slowed in August as it struggled with cash flow problems. When its situation deteriorated, the popular WeChat instant messaging platform closed down the company’s channel to facilitate user payments and froze its account with around 40 million yuan ($6 million), Coolqi said. Attempts to restore the service and unfreeze the funds were unsuccessful.

Coolqi said it has invested around 900 million yuan to date, has 1.5 million users who haven’t requested refunds yet and about 1.4 million bikes on the road.

“So you can see that Coolqi is not a company with no value,” it said. “We haven’t given up. At the moment we are talking with funding sources and looking for support and guidance from the government.”