By Denise Jia and Chen Mengfan 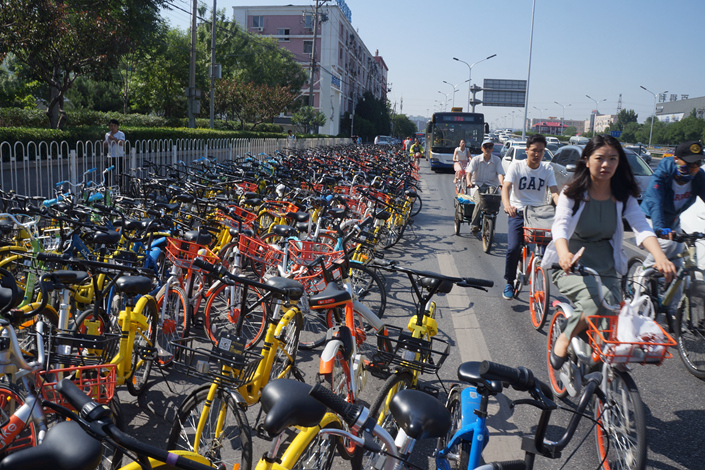 Beijing’s transportation authority Thursday banned bike-share companies from placing new vehicles on the streets and said it is working on guidelines for the booming industry, including technology, management and service standards.

The 2.35 million shared bikes currently placed by 15 companies on the streets of Beijing have clogged sidewalks and led to haphazard parking and obstructions outside subway stations and shopping malls, Beijing’s municipal transport commission said on its social media platform.

The capital’s decision followed a similar ban in late August by Guangzhou authorities. Ten other cities joined the initiative including Shenzhen, Shanghai and Wuhan.

Beijing’s transport commission said it has held talks with executives from major bike-sharing companies about the ruling and gained their support.

Beijing-based Mobike, one of the largest bike-share firms backed by Chinese tech giant Tencent Holdings, said data shows that the bike-share market has reached supply-demand balance in big cities like Shanghai and Guangzhou, and the company now plans to focus on improving its services and management.

Mobike’s archrival Ofo Inc. said the company would focus on the operation of existing vehicles and designate a maintenance officer for each operating area.

Backed by multibillion-dollar investments tied to venture capital firms, 120 bike-share startups have been battling in a crowded market by flooding city streets across the nation with about 16 million bikes. Each rival wants to be the sharing company offering the most and most-easily accessible bikes.

Adding new bikes to the streets is the easiest solution for most players as maintenance expenses are even higher than the costs of new bikes, according to an executive of Shanghai-based Ubike.

With the bans on new bikes in large cities, bike-share companies are considering expanding to smaller cities and into the global market. Ofo rolled out its service in Singapore and Seattle as the first Chinese bike-share company to operate overseas. Mobike made its debut in June in the U.K.