By Cai Tongxu and April Ma 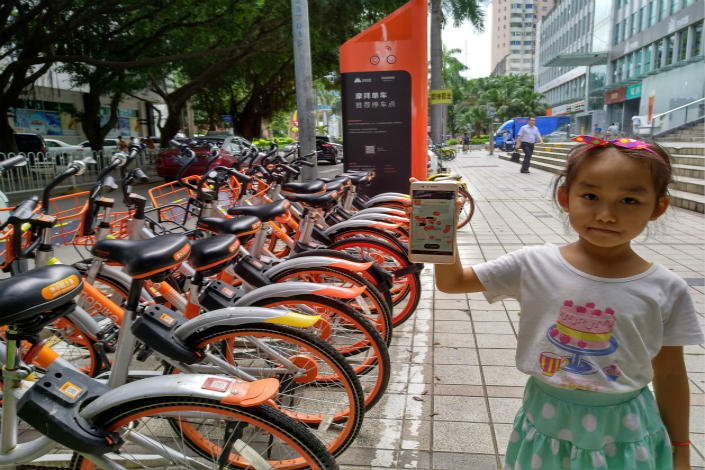 Mobike users in major cities across China say they were unable to unlock the company’s trademark orange and silver two-wheelers at about 9 a.m. on Thursday. Above, a girl shows the Mobike app on a smartphone this month in Shenzhen. Photo: Visual China

(Beijing) — A widespread snarl-up in the system of one of China’s leading bike-sharing services during rush hour stranded thousands who have rapidly come to depend on rented two-wheelers as part of their daily commute.

Users in major cities complained online of a system error on Mobike, saying they were unable to unlock the company’s trademark orange and silver two-wheelers at about 9 a.m. on Thursday. Users normally can unlock the bikes by using a special app on their smartphones to scan a unique QR code on the back of each bike.

Most unlockable bikes in Beijing, Guangzhou, Shanghai and Nanjing were back in service after about an hour, according to a Chinese media report. However, some users on Friday told Caixin that many bikes were apparently still affected by the glitch, generating a “service unavailable” message when QR codes were scanned.

Shanghai-based operator Beijing Mobike Technology Co. confirmed the problem, although it did not elaborate on its cause or magnitude.

The error was felt by legions of morning riders who have come to rely on the ubiquitous bikes to travel to work each day. Services like Mobike’s differ from traditional sharing services because they allow users to start riding wherever they can find a bike, and then park it wherever they want when they are finished.

“When I scanned the code, its progress bar stopped at zero and would not move,” fumed one user on Friday near Sanlitun, a major business and shopping area in Beijing. “The app showed gibberish and I wasted more than 10 minutes trying to unlock a bike.”

Another rider complained about the worthlessness of the virtual coupons that Mobike issued to apologize to users for the outage.

“Do you know what it feels like to see piles of bikes, but not be able to ride a single one?” the user wrote on Weibo, China’s equivalent of Twitter.

This is not the first time a technical hiccup has affected one China’s two leading bike-sharing firms — Mobike and Ofo Inc. — each of which now boasts tens of millions of users. Users of both services say that both systems have experienced short periods of downtime since September when they started growing in popularity.

Such short-term outages could become more common as the companies spend billions of yuan in investment cash to attract millions of new riders and expand into a growing number of global markets.