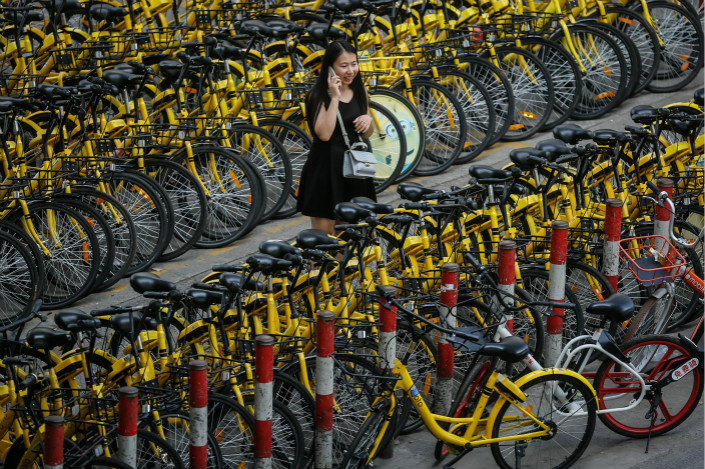 Shenzhen, Shanghai, Zhengzhou, Hangzhou and Nanjing are among the Chinese cities that are acting to address the growing problem of shared bicycles' cluttering their streets. Above, a Shanghai sidewalk is crowded with Ofo Inc.'s distinctive yellow shared bicycles on Aug. 23. Photo: Visual China

Some of China’s biggest cities have called a timeout on the companies responsible for crowding sidewalks with shared bikes.

Shenzhen, Shanghai, Zhengzhou, Hangzhou and Nanjing are among the cities hitting the bike-sharing “pause” button in recent weeks.

The Guangzhou city government on Tuesday reiterated its temporary ban on new bike-share two-wheelers, reminding sharing companies that they must stop adding the vehicles to street-side parking sites. The ban is to continue until companies devise better strategies for managing the bikes already available and clearing out abandoned wrecks that are encroaching on public space.

Despite the ban, Guangzhou transportation authorities said they have noticed 15 companies continuing to pour new bikes into the city, which is famously progressive and initially welcomed bike-sharing with open arms.

One of the largest bike-sharing firms, Ofo Inc., has been among the worst violators of the government ban in Guangzhou, where the local resident-to-bike ratio has now reached 15-to-1, according to the official Xinhua News Agency.

Egged on by multibillion-dollar investments tied to venture capital firms, bike-sharing companies have raced against one another to win the commuters who pay for rentals using smartphone apps. Each rival wants to be the sharing company offering the most and most-easily accessible bikes.

Bike-sharing services were originally designed to provide low-cost, zero-emission, short-distance transportation for the “last kilometer” of an urban trip, often between a subway stop and a home or workplace. But since last year, the industry has spun nearly out of control in the face of investor enthusiasm.

What was supposed to be a no-carbon cure for congestion has been called an urban disease, highlighted by haphazard parking, poor management and huge quantities of bikes clogging sidewalks. Abandoned bikes have been found strewn in streets, stacked on tree branches, lying in rivers and piled on empty lots.

China’s 120 private, shared-bike companies have together put about 16 million bikes on city streets across the nation, according to China’s transportation ministry. That roughly translates into one shared bike for every 50 urban dwellers.

The nation’s legislators have been trying to tackle bike-sharing issues. During a review of a proposed law against unfair competition, members of one legislative council proposed a rule preventing large investment houses from trying to overwhelm competitors by accepting huge losses — and wasting resources — through unreasonable business expansions.

Yet some cities have put few restrictions on bike-sharing companies while taking a soft approach to two-wheeler control.

Under a pilot project in some parts of downtown Beijing, for example, electronic “fences” have been built that prevent the operation of smartphone app-triggered bike locks outside designated areas. Anyone parking a bike outside the fence can’t lock the bike, and thus incurs charges until the lock is reactivated.