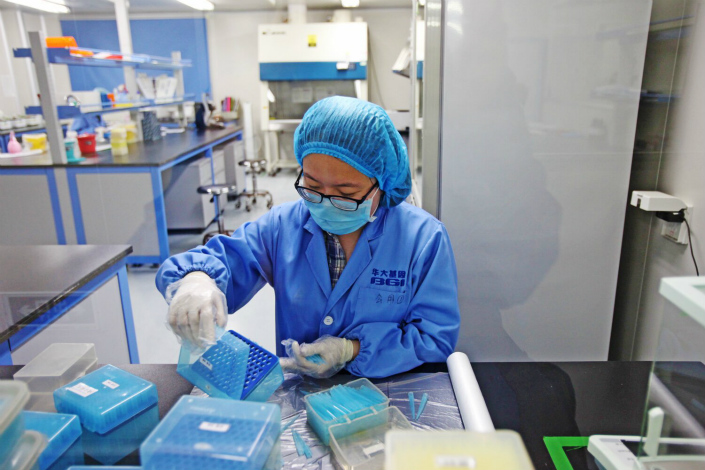 BGI admitted that it is currently involved in a lawsuit, but said it is as a third party rather than as the plaintiff or defendant, so it is not legally obligated to disclose information about the case. Photo: Visual China

BGI Genomics Co., one of China’s largest genome sequencing companies, has responded to reports about a discrepancy in its financial data and denied a rumor that it was embroiled in a lawsuit.

The Shenzhen-listed biotechnology firm published a letter late Monday in response to inquiries from the Shenzhen Stock Exchange, after Chinese media outlets said they had found inconsistent data in two investment prospectuses for the company’s product sales.

The reports said that sales figures for BGI’s reproductive health products for the same period was 17.54% lower in a March 2017 document than it was in a December 2015 publication by the company. They also alleged that BGI was involved in a lawsuit.

BGI said in its letter Monday that the discrepancy was caused by a change in its statistical methods.

In the December 2015 prospectus, BGI based its sales figure on the number of prenatal test samples measured during the production process, according to the company, a pioneer in China’s gene-testing industry when it first received regulatory approval in 2014. But in the March 2017 document, BGI counted the number of test reports sent to customers, resulting in the discrepancy, the company said.

BGI added that it is currently involved in a lawsuit, but as a third party rather than as the plaintiff or defendant, so it is not legally obligated to disclose information about the case.

The company’s stock has been closely watched since its $81 million initial public offering in Shenzhen in July.

The company halted trading of its shares on Nov. 16, after its share price grew to become 17 times what it was at its listing, causing concern among market-watchers. Trading resumed on Nov. 23.

BGI, established in 1999, gets most of its revenue from just one commercialized product, a noninvasive prenatal test.