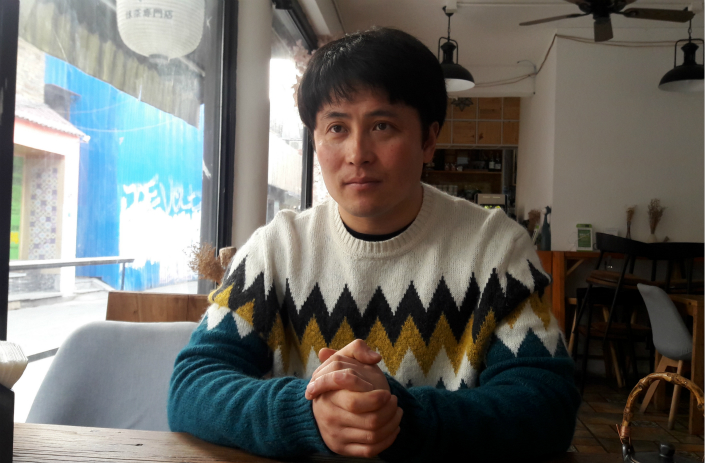 From Los Angeles, to Mumbai to Beijing — every major film city attracts thousands of young migrants who come to these cities in search of stardom.

Many leave empty-handed, while a few survive through grit and a touch of good fortune.

Caixin recently spoke to soldier-turned-actor Liu Peng, who has been the de-facto body double for martial arts superstar Jackie Chan since 2014, to find out how he caught his first big break.

“When I first came to Beijing in 2010, I worked in Bayi Film Base for just food and lodging,” said Liu, who comes from a small town in Shaanxi province. “At first I was in a room with over 40 other youths like me, who were all there because they were bitten by the acting bug. But after a few days, they would disappear.”

After a three-month stint at the state-backed film studio, Liu decided to quit and started hanging out at bars distributing resumes to potential recruiters.

“I slept in 24-hour KFCs or internet cafes and woke up every morning at 4.30 a.m. to catch the bus to the entrance of the Beijing Film Academy. I would wait there for hours, waiting for recruiters to come and pick me for a minor role,” he added.

Liu, 36, has worked with Chan on “Skiptrace,” “Kung Fu Yoga,” “Railroad Tigers,” and a new film “Bleeding Steel,” which is expected to be released early next year.

The following are translated excerpts of the Chinese-language interview.

Caixin: What was your first impression when you started working with Jackie Chan?

The first time I worked as Jackie Chan’s body double was when he was filming “Skiptrace” in Inner Mongolia, in September 2014.

But the first time I saw him was in Hebei in 2010, on the sets for the period epic “The Revolution of 1911.” I was picked to play a cook in the film… it was a small role without any dialogue.

The first moment I saw him, he was wearing a military uniform and a hat, but I could still see his eyes. My breath quickened as if I’d just finished running 800 meters and felt my legs become heavier.

The moment he walked in, he started asking a lot of questions about the props’ designs, their placement etc. My first impression was that Jackie Chan was a very inquisitive person and that he loved to learn, explore new things.

He also once said he couldn’t stay still. I feel that he is someone who never remains static.

I’m from a small village called Hanzhong, in Yangxian county, Shaanxi province. For a person like me seeing an international star was also a dream come true.

How did you get the opportunity to go from playing minor roles to being Chan’s body double? What made you enter the film industry in the first place?

I got into the film industry by accident. But it has taken real grit to get to this place.

After finishing high school, I joined the military and served in Sichuan for two years. Before joining the armed forces I was an introvert who was afraid to talk to people.

After I was decommissioned in 2006, I worked as a security guard at the Guangdong University of Foreign Studies. I did that job for nearly 5 years and then felt I had to change. I was scouting for opportunities, when I went to the Guangzhou Zhujiang film studio. It was my birthday, but I didn’t want to spend money on film tickets. So instead I decided to go watch a film shoot for free. When I was leaving there, I saw a group of men and women standing at the gate. I went up to ask them what they were doing. They said they were there to audition for a film, and while I was talking to them, one man came and asked me for my contact information and ordered me into a nearby room. I was confused.

When I walked in, I saw a man with a script. It was much later that I learned it was director Wang Jiawei choosing actors for the film “The Grandmaster,” set in the 1940s. He gave snappy instructions and told me to act out a scene where someone was trying to buy opium. Then he said “camera on.” It was the first time I saw a film camera in my life.

That was my first taste of acting. I wasn’t chosen for that film, but after three months, I again met the man who took my phone number on that day and he said that if I wanted to be in the movies, I should go to Beijing. And I decided to follow his advice.

So you decided to come to Beijing and try your luck in films on a whim?

Yes. I didn’t know anyone when I first got here in October 2010. And worse, I lost my luggage and my certificate from the army on the first day I arrived. It was stolen by someone I met in the train and I was left with three yuan ($0.45) in my pocket.

This is how it happened. I had several heavy items of luggage and I asked for help from a young man to road it onto the train in Guangzhou. We became friends on the train and he said he was planning to quit his job in Beijing. I told him I was going to a studio in Beijing’s Fengtai area for an audition and asked him to join me. He agreed. We got off at Beijing West Railway Station and went straight for the audition. I left my luggage with him when I entered the acting room, and when I came back he had disappeared with my things.

I used one yuan to call my twin sister and asked her to put some money in my bank card. When I told one of the organizers of the audition about my situation, he gave me 20 yuan and told me to go to the Bayi Film Base in Huairou.

When I got there, I was put me in a dorm room, with about 40 other youngsters who were all bitten by the acting bug.

I was never paid during the three months I worked at the Bayi Film Base. They exploit your enthusiasm. But the “dream” generally lasts only for about half a month. Many people I met on there on the first day were gone by the third day, because they didn't get paid. At first our meal was a bowl of soup every day with two steamed buns with a few pickled vegetables on the side.

Within weeks I became a site manager there and was transferred to a two-person dorm. But I was still given only food and lodging.

Then how did you find your first big break?

So, three months later, I decided to leave. While at Bayi, I watched how talent scouts worked. I printed about 100 resumes and decided to go into the bars where they hang out.

Those days, I only had one meal a day at about 5:30 p.m. I spent the night at 24-hour KFCs, McDonald's and internet cafes. During that period, I woke up at 4.30 a.m. every day and went to the Beijing Film Academy. Recruiters would usually come to the gate to pick actors for minor roles.

Those days, I used to shower in public bathhouse next to the university and eat in the university canteen. The first movie I was picked to play a minor role in was also a Jackie Chan film, “The Revolution of 1911” in 2010, and I was thrilled when I was paid 1,200 yuan after shooting for seven days. Then several years later I got picked to be his body double

What does your work as a body double involve?

I have to stand in for the actor, while the cameramen decide on the lighting and their angle or while the set designers get everything ready. And may be my hand or leg may appear in some of the shots. I might also be used in long-distance shots where the star’s face isn’t visible. It requires a lot of patience and attention to detail. I can see how Jackie Chan would walk, or move in a given situation with my eyes closed.

What’s your next goal?

In terms of acting, I want to become a recognized actor in my own right. And if I get the chance, I’d like to become a producer.