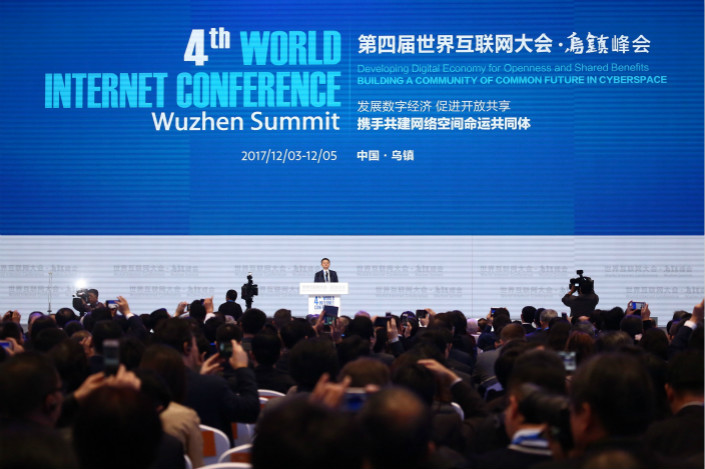 Prominent technology leaders from home and abroad were in attendance at the World Internet Conference in Wuzhen, including Alibaba Group Holding Ltd. founder Jack Ma (pictured). An analyst said the overseas executives are drawn to the conference as it's "very important for senior leaders, especially with big global branding, that their executives are here to meet up with local business.” Photo: IC

The CEOs of Apple, Google and Cisco were among a cadre of global high-tech executives attending China’s premier internet event this week, reflecting the country’s status as the world’s largest online market despite its strong state oversight of the medium.

Apple Inc. CEO Tim Cook and Google CEO Sundar Pichai led the list of high-tech dignitaries at the World Internet Conference’s fourth staging in the scenic town of Wuzhen near Shanghai. Their presence comes as Apple counts China as one of its top global markets, making up nearly a fifth of its sales, while Google reportedly wants to launch a mainland Chinese version of its Google Play app store.

Their attendance comes as China rapidly emerges as the world’s largest internet market, with more than 700 million users, the majority of them going online with their smartphones, according to the latest data. The market’s sheer size has helped spawn some of the world’s largest and most valuable internet companies, including gaming and social networking giant Tencent Holdings Ltd. and e-commerce leader Alibaba Group Holding Ltd.

The attendance of so many top global executives reflects not only the growing importance of the China internet market, but also the event’s rising prominence as it heads into its fourth year, said Kitty Fok, China managing director for market research firm IDC.

“For a lot of these international companies, China is still a very big and important market, especially for online,” Fok said. “In the last one to two years, the whole internet-plus has moved China to another level, in mobile usage in particular. … It’s very important for senior leaders, especially with big global branding, that their executives are here to meet up with local business.”

Founders of Tencent, Alibaba and Baidu Inc., China’s three largest internet companies, all spoke at the event, as did President Xi Jinping, who is placing major emphasis on moving China into higher value-added industries away from its roots as a manufacturing powerhouse.

China is moving aggressively in the 5G space, reversing a previous policy of trailing behind the world in next-generation wireless standards, in hopes of playing a greater role in the setting of new standards and developing related technologies.

China’s state planner said last week the country will start building fledgling 5G networks next year, with an aim of establishing a presence in at least five major cities. China Mobile, the nation’s top global carrier, is aiming to launch a pre-commercial 5G service next year and have more than 10,000 5G base stations by 2020, according to a report in the official English-language China Daily posted on the Wuzhen event’s website.