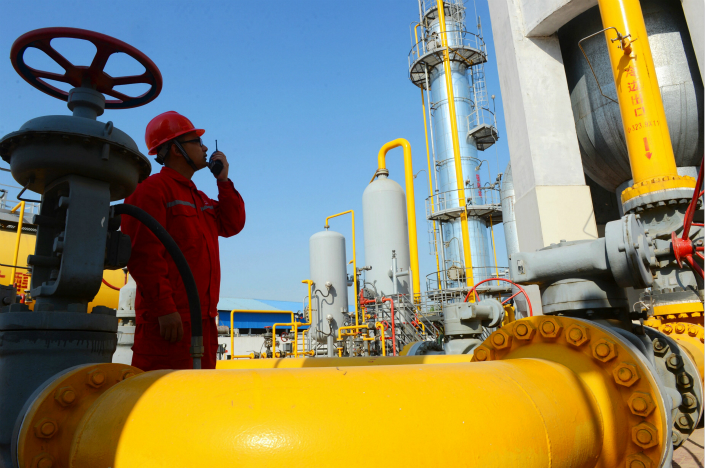 Liquefied natural gas prices have doubled in some regions over the past three months. One Xinjiang Uyghur autonomous region supplier had tripled the price to 6,300 yuan ($952) per ton by Sunday from early September. Photo: Visual China

China’s top economic planner is moving to rein in natural gas prices, as the country experiences a fuel shortage amid a national campaign to replace coal with cleaner energy.

Liquefied natural gas (LNG) suppliers shouldn’t stockpile fuel to boost prices or collude to fix prices, the National Development and Reform Commission (NDRC) told its 11 branches across the northern China in a Monday meeting, urging them to intensify oversight of the industry and stabilize prices.

In China, natural gas is primarily supplied through pipelines based on a government-set price, but bottled LNG is used to supplement the fuel once there is a shortage. LNG prices are market-determined.

There has been an acute natural gas shortage this year after the government forcefully pushed forward a program to replace coal-fueled heating systems with natural gas- or electricity-powered ones, with a focus on both residences and industrial buildings across smoggy northern China. The NDRC’s Hebei province branch has warned of a natural gas shortage of around 10% to 20% starting Nov. 28.

Against this background, LNG prices have doubled in certain regions over the past three months. One Xinjiang Uyghur autonomous region supplier had tripled the price to 6,300 yuan ($952) per ton by Sunday from early September, Everbright Securities analyst Qiu Xiaofeng said during an event Monday.

The NDRC’s efforts to put a brake on the surging price of LNG seems to have had an impact, as a supplier in the Inner Mongolia autonomous region saw the price drop 2.5% to 7,500 yuan per ton on Tuesday from two days before, said natural gas analyst Chen Yunying from consultancy ICIS.

The natural gas shortage may grow greater as the authorities have yet to replace the heating systems that they removed in some places. In Hebei, for example, the replacement program should have been completed at the end of October, but the program remains incomplete in some areas.

Several schools in Hebei’s Quyang county, where the temperature has dropped below 0 degrees Celsius (32 degrees Fahrenheit), are without heating. A local education official said that the project to replace the coal-fueled heaters in some schools hasn’t been completed yet and the government is working overtime to make sure it can be finished as soon as possible, the newspaper China Youth Daily reported Tuesday.