By Luo Guoping and Fran Wang 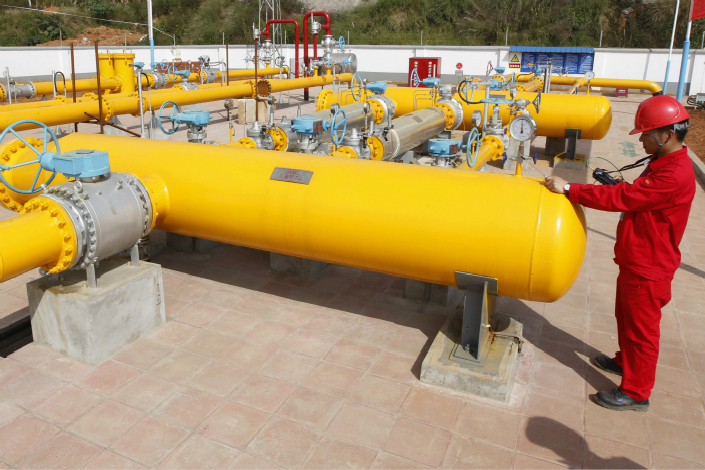 China has been struggling to secure enough supplies to meet the boom in demand for natural gas. Imports soared 24.9% year-on-year in the first 10 months of the year to 54.2 million tons, up from a pace of 21.1% in the same period last year, customs figures show. Photo: Visual China

China's consumption of natural gas has risen more than twice as quickly as it did last year as the government’s drive to replace coal with cleaner fuel boosted demand, a new report by the research arm of the country’s top oil producer showed.

A total of 167.6 billion cubic meters (35.3 billion cubic feet) was consumed in the first nine months of this year, 16.6% more than the same period in 2016, CNPC Economics and Technology Research Institute, part of China National Petroleum Corp., estimated in its report published on Wednesday. That compares with a growth rate of 7% in the same period last year, the institute’s data show.

Booming demand for natural gas has been underpinned by the Chinese government's campaign to reduce air pollution, which has led to orders to replace coal with the cleaner fuel, said Duan Zhaofang, chief engineer of the institute's unit that specializes in the natural gas market.

“Apart from the boost from environmental protection policies, lower natural gas prices and a recovery in the use of the fuel by the industrial sector have also contributed to the rapid increase in demand for the fuel this year,” she said at an industry seminar.

Consumption is expected to spike further over the coming months as northern China enters the peak winter heating season and the government makes a more aggressive push to switch from coal to natural gas to contain smog, Duan said.

The government’s fuel replacement program initially focused on residential heating, both in urban and rural areas, where traditionally homes have been heated with coal. This year, the campaign has been rolled out to the industrial sector as the government ramps up its anti-pollution efforts, she said.

Natural-gas suppliers are “under enormous pressure” to ensure demand can be met, she said, adding that authorities may take measures such as raising prices and limiting production at some industrial companies to restrict consumption if warnings about gas shortages over the winter materialize.

China has been struggling to secure enough supplies to meet the boom in demand for natural gas. Imports soared 24.9% year-on-year in the first 10 months of the year to 54.2 million tons, up from a pace of 21.1% in the same period last year, customs figures show.

Growth in China’s natural gas usage has been volatile. Consumption lost steam in 2014 and rose by just 3.7% in 2015, the weakest increase in a decade, as the country’s economic expansion slowed, the price of crude oil dropped, and domestic downstream industries such as petrochemical and power generation suffered from excess capacity.

But consumption recovered in 2016, rising by 8% and mirroring the rebound in electricity usage, as the country’s economic performance stabilized. A recovery in the industrial sector and the government’s supply-side reforms such as reducing excess capacity, boosted prices of goods such as steel and aluminum, prompting companies to increase production which supported higher demand for energy generally, including gas.

Duan said the natural gas sector has continued to benefit from the campaign against excess capacity, noting that demand for the fuel has picked up partly because major industrial consumers such as petrochemical, steel, and glass manufacturers have been flush with money as they benefited from significant increases in product prices. Around 45% of China’s natural gas consumption goes to power the industrial sector or is used as a raw material in the petrochemical sector, she said.

Industrial companies have been more willing to switch to natural gas this year as prices have not risen as rapidly as coal, which has also been a target of the drive to reduce excess capacity, Duan said. The per unit cost of generating heat from natural gas has fallen from more than four times that of coal to around 2.5 times, she said.

In September, the National Development and Reform Commission, China’s top economic planning agency, lowered the benchmark price of natural gas for commercial and industrial users by 0.1 yuan ($0.015) per cubic meter, a move that’s estimated to lead to savings of more than $1 billion a year.