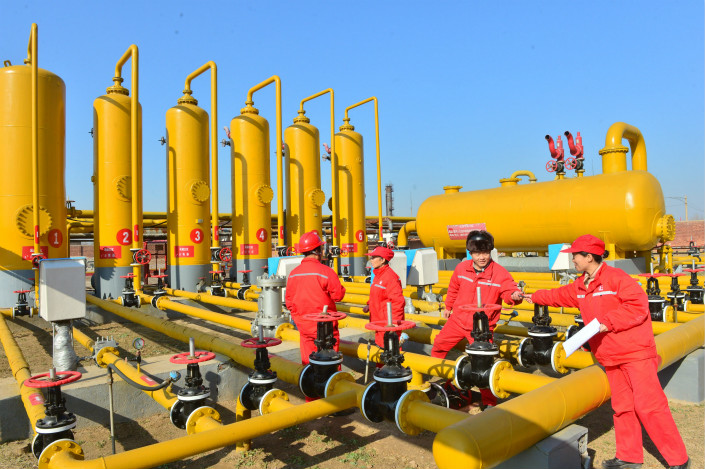 A newly announced deal between three Chinese companies and the U.S. state of Alaska will include a liquefaction plant, 800-mile gas pipeline and a gas treatment plant. Above, employees of the Sinopec petrochemical oilfield in the Zhongyuan area in Puyang, Henan province, inspect the facility in December 2015. Photo: Visual China

Alaska and three major Chinese firms signed an agreement on Thursday to cooperate on development of a massive natural gas project in the energy-rich U.S. state, as China looks for sources of the cleaner-burning fuel to reduce its reliance on dirtier coal.

The signing came as U.S. President Donald Trump made his first visit to China, and as he pressures his counterpart, Xi Jinping, to take more steps to reduce the two countries’ large trade imbalance.

No financial details were provided, including how much the new Chinese partners might invest in the massive project, which will be capable of processing 20 million metric tons (22 million tons) of gas per year. The two sides said the deal will see them “work cooperatively on LNG (liquefied natural gas) marketing, financing, investment model and China content in Alaska LNG, and get a periodic result by 2018.”

The project includes a liquefaction plant, 800-mile gas pipeline and a gas treatment plant on the North Slope of Alaska. No cost has been given, though industry reports estimate the figure at about $45 billion.

Sinopec is interested in purchasing natural gas from the project on a long-term stable basis, said Alaska Gov. Bill Walker, who accompanied Trump on his trip to Beijing. “This is an agreement that will provide Alaska with an economic boom comparable to the development of the Trans-Alaska Pipeline System in the 1970s,” he said in an announcement of the deal.

Walker was just one of several energy-related officials accompanying Trump on the China leg of the trip, representing an area where the two countries might cooperate as the U.S. president stresses the need for a more balanced trade relationship. Others included top executives from Texas LNG, Chenier Energy Inc. and Delfin Midstream.

The three Chinese partners all emphasized their credentials as major buyers, investors and developers in big projects such as ones from the energy sector.

The tie-up comes as China looks for cleaner energy sources in a bid to wean itself off dirtier coal, a major element behind the country’s current heavy air pollution. National gas is seen as one of the easiest substitutes, and the country is already involved in a similar pipeline project to import such gas from Russia. That project has the pair developing a pipeline that will be able to transport up to 38 billion cubic meters (1.34 trillion cubic feet) of natural gas annually from Russia into China.