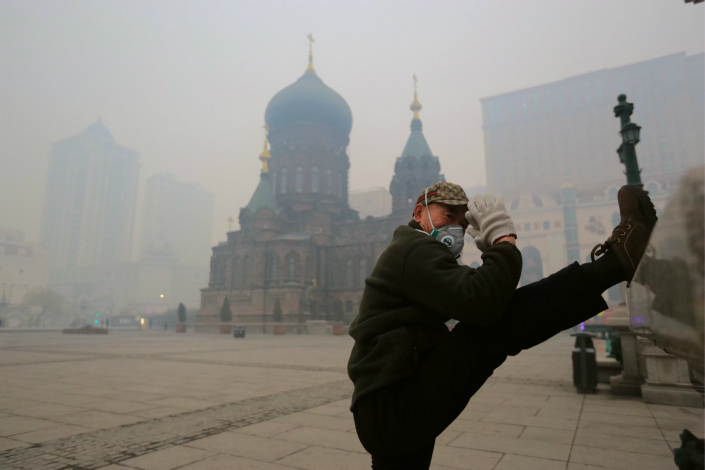 Local officials from Harbin and three other cities in the northeastern province of Heilongjiang, were also censured at a meeting in Beijing for inflating data linked to the safe disposal of crop waste without burning, the Ministry of Environmental Protection (MEP) said Tuesday.

This year, more farmers in Heilongjiang opted to burn stubble in their fields after the autumn harvest, creating a major source of air pollution, the ministry said.

Residents in many parts of Heilongjiang were choked by smog from Oct. 18 to Oct. 19, in the first major bout of foul air to hit the region this year. The pollution level in the provincial capital Harbin was off the charts from 10 a.m. to 10 p.m. on Oct. 18, with the air quality index jumping from between 50 to 100, indicating mild pollution, to well over 500, the top of the gauge, data from the ministry showed.

The burning of crop waste such as corn stalks by local famers and in coal-fired heating systems used in rural homes are largely to blame for the pollution, according to an official from the Harbin Environmental Protection Bureau who asked not to be named.

Citing statistics collected by remote sensing systems, the MEP said it identified 4,700 fires and thermally sensitive points in Harbin, Jiamusi, Shuangyashan and Hegang from Oct. 11 to Nov. 5. This year, the number of fires lit in these cities to burn off crop stubble has “risen exponentially,” the ministry said, without providing an exact number. In Harbin alone, the number of such burn-offs increased five-fold from a year earlier, it said.

Chinese farmers have for centuries burned dry corn stalks and wheat straw after the autumn harvest because it is a cost-effective way to dispose of farm waste. However, the practice has now become increasingly problematic amid the worsening air quality.

Statistics from the Heilongjiang Agricultural Commission show that more than three-fifths of the crop waste in the region is properly disposed without harming the environment. In the cities of Shuangyashan and Hegang, authorities claimed to be making compost out of 46.9% and 44.6% of the waste, respectively.

However, random inspections by the environmental protection ministry found the figures were grossly inflated by up to 90% in Shuangyashan and 70% in Hegang.

Authorities in Fujin and Tongjiang, two small towns under the administration of Jiamusi, have also overstated the portion of the by-product they could properly dispose of. The two cities claimed they could make compost out of nearly 60% of its crop stubble, whereas the amount reused without burning was 12% in Fujin and 10.6% in Tongjiang.

The MEP didn’t say how it will punish officials found to have falsified official data.