Learning to Be Local

By Mo Yelin and Xu Heqian 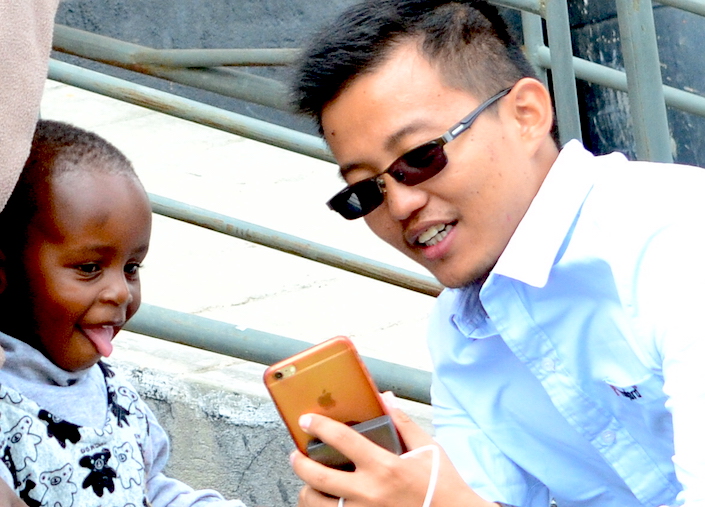 (NAIROBI, Kenya) It didn’t take long for Zhou Yi to decide to accept a job in Africa.

Though many Chinese graduates have a stereotypical view of the continent as poor and dangerous, Zhou, who is now a sales manager in Kenya for the Shenzhen-based cell phone maker Transsion Holdings, leapt at the chance to do something out of the ordinary.

“Every time I took a flight, the people sitting next to you could be from India, Brazil, anywhere. It’s amazing. When I was in the air, I would think, what if we crashed and that was the end? I wanted to do something different with my life,” the 25-year-old explained during a corporate social responsibility visit to the Emanuel slum neighborhood in the Kenyan capital Nairobi.

Zhou and his colleagues had organized a birthday party for a local orphanage, a dimly-lit bare concrete block building that sits on a trash-littered dirt road.

“We sometimes play videos to show them the rest of the world to motivate them. One of them could end up being president, who knows?” Zhou said as he waved goodbye to a crowd of children through the glass of the car whisking him away from the slum.

This open-mindedness and willingness to interact with the local culture is typical of the young Chinese professionals now working on the continent, who unlike the state-owned enterprise workers that came before them, can communicate in English and are looking to work with Africa for the long-term.

Young people like Zhou also prefer to work for private companies serving the local market, unlike their older counterparts who typically came to Africa to work on big projects for state-owned enterprises.

“I don’t feel like I’m making a sacrifice working here, I’m actually enjoying it,” said 29-year-old Hu Jiao while fishing out chunks of tilapia cooked in a traditional Sichuanese spicy broth at an upmarket Chinese restaurant in the Tanzanian city of Dar Es Salaam.

“Life back home is just a boring routine, but where I’m based, Nairobi,it is so multicultural,” said the Guangdong province native, who had been sent to the city, one of the world’s fastest-growing urban areas, by the Kenya-based Chinese tech company that employs her.

Hu said that getting to know Kenyans on a personal level has been key to settling in so far away from home.

In general, the Chinese community in Africa has been criticized for keeping to itself. This has led to a widespread perception among many Africans that the only locals Chinese people are interested in getting to know are corrupt officials.

But Hu says that she finds the Chinese community to be too “messy” as they are all competing for pieces of the same pie.

English-speaker Hu finds the language barrier to be less of a problem than many of her monoglot compatriots. Communication is important to those trying to localize their private businesses, with many using not only English at work but also the East African lingua franca Swahili.

Shi Shiyi, who owns a smart two-story medical clinic staffed entirely by Tanzanians in a swanky downtown Dar es Salaam neighborhood, said that the city’s Chinese community is not his company’s priority and in fact he has often told Chinese customers to wait their turn after they demanded to be seen before Africans.

“We are here to offer services to all, we won’t give you special treatment simply because you are Chinese,” the 37-year-old said.

This new generation of Chinese entrepreneurs and professionals in Africa are changing the paradigm of China-Africa business relations, as politics-driven projects that focus on natural resources are beginning to give way to private, profit-driven enterprises.

These new business leaders are more savvy and responsive to the market and local needs than those who came before.

Transsion Holdings, the company that Zhou works for, has cornered 38% percent of the handset market in Africa, according to IDC. A business strategy specifically tailored to the African market helped it secure its dominance over the continent’s mobile phone industry. Transsion has ensured its phones have a long battery life, loud speakers and cameras which dark-skinned users can use to take good-looking selfies depending on specific models.

When Wang Chong, the company’s Manager of East Africa Region, first came to Kenya 10 years ago, he realized that the kind of after-sales service common in China didn’t exist in the country. His team then set up one of Kenya’s first after-sales service centers, which he says helped pave the way for Transsion’s success.

“Only if you settle down here for many years, can you understand the market, which takes patience and a lot of your own observations,” Wang said, sitting in a modern Nairobi office surrounded by young Kenyans tapping at their computer keyboards.

As the perspective of the Chinese community towards their host countries is shifting, so is the perception of these incomers among the locals.

“I can tell you that almost every thing here has a connection with Chinese, ” a Kenyan man called Ben said while munching on fried fish at a popular restaurant on the outskirts of Nairobi.

Sitting at a table in the restaurant's outdoor area, where despite the weather being a balmy 20 degrees Celsius (68 degrees Fahrenheit) staff had laid out braziers full of burning coal, the besuited middle-aged man pointed at the Nairobi skyline in the distance.

“The Chinese used to be mainly involved in big projects, like railways and airports, but now they are expanding into almost every sector, even real estate,” he said.

But Ben is positive about the increasing presence of Chinese businesses in his country, saying that “people are actually getting more comfortable with them now, as they are starting to invest and do business here in the long term.