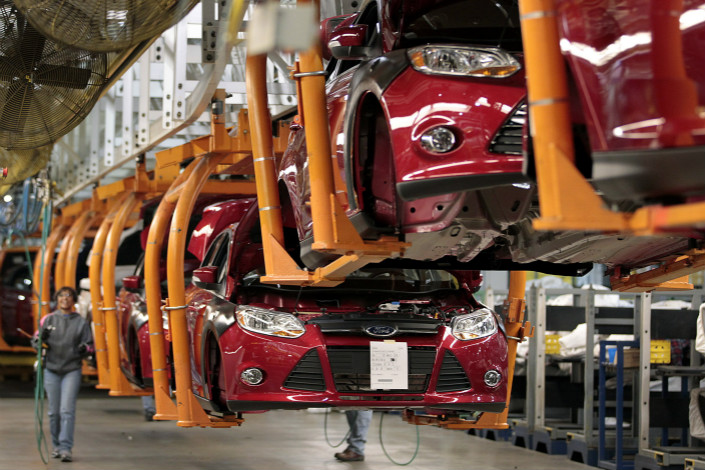 The new models that Ford plans to launch in China will include at least 15 electric models under the Ford and Lincoln brands. Above, vehicles get assembled at a Ford plant in the U.S. in December 2015. Photo: Visual China

Ford Motor Co. will launch 50 new vehicle models in China by 2025, the U.S. carmaker said in a statement on its China growth plan Tuesday, after a year of lackluster performance in the world’s second-largest economy.

The 50 planned vehicles will include at least 15 electric cars under the Ford and Lincoln marques, and five more vehicles that will be assembled within China for Chinese consumers from 2019, the company said.

As of October, Ford’s 2017 car sales were down 5% from the same period in 2016. To meet future growth targets, the company will “contain structural cost in the region” next year, according to the statement.

The company also outlined its planned shift toward smart vehicles, saying that all new Ford and Lincoln vehicles in China will be connected to the internet by the end of 2019.

Ford’s announcement comes at a time when foreign automakers, encouraged by policy changes in China, are rushing to grab a share of the country’s burgeoning electric vehicle market.

In September, China’s vice minister of industry and information technology said the government planned to ban the sales of fossil-fuel powered cars, without specifying a time frame.

Then, on Nov. 10, China’s Ministry of Foreign Affairs said it would soon allow foreign companies to own majority stakes in their Chinese car factories, provided that the companies produce new-energy cars in free trade zones by June 2018.

Ford has signed an agreement with China’s Anhui Zotye Automobile to set up a 5 billion-yuan ($755.6 million) electric passenger vehicle joint venture in China. The Zotye-Ford joint venture will launch a range of all-electric vehicles, according to Ford.

General Motors Co. has said that it plans to make all its new vehicles in China either hybrid or fully electric by 2025.

Correction: The original version of this story misstated the year Ford said it would release its 50 new China models. The correct year is 2025.