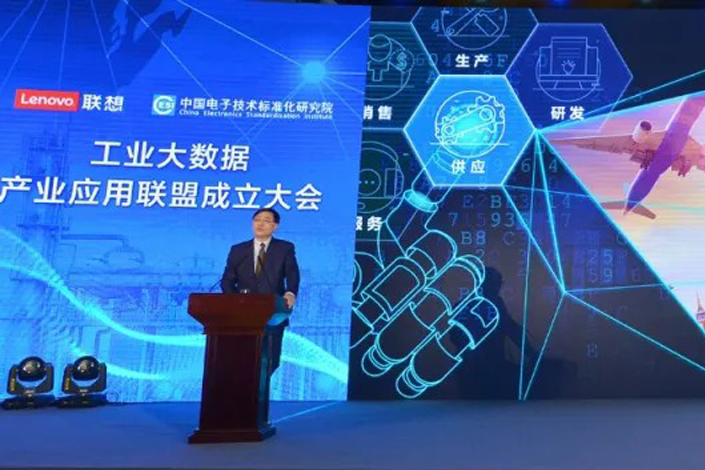 Lenovo Group Chairman and CEO Yang Yuanqing speaks at the inaugural meeting of the Industrial Big Data Industry Application Alliance in Beijing on Friday. The group brought together more than 80 names from the high-tech and manufacturing sectors for its first meeting. Photo: Lenovo

A newly formed group led by computer stalwart Lenovo Group Ltd. is aiming to bring China’s manufacturing juggernaut, the original source of its modern economic transformation, to the digital age of big data.

The company, one of China’s oldest high-tech names with more than three decades of history, and the China Electronics Standardization Institute announced their launch of the initiative on Friday, in a grouping that will initially bring together more than 80 names from the high-tech and manufacturing sectors, covering a wide range of areas.

Other founding members of the Industrial Big Data Industry Application Alliance will include such diverse names as the cloud unit of internet giant Tencent Holdings Ltd., as well as TV and appliance manufacturing giants TCL Corp. and Haier Group Corp. The alliance hopes to eventually sign up as many as 100,000 members within the next five years.

Manufacturing was the main early driver of China’s economic modernization over the last 30 years and encompasses a huge range of products and services — many of them from the lower-tech realm made with equipment developed before the digital age. Those realities have made the sector one of the last to jump on the digitization and big data bandwagon, which are being heavily promoted by Beijing as it seeks to improve efficiencies and create new industries that can capitalize on the troves of big data generated by companies and consumers.

The barriers to digitization of the Chinese manufacturing complex are high. Data is scattered, often isolated and lacks unified standards, said Tong Fuyao, a Lenovo senior vice president who will serve as chairman of the new alliance. In the absence of major industry players taking the lead, the group collectively lacks a common platform to help companies link throughout various manufacturing streams to link up their wide array of data to improve efficiency, he added.

As a global PC company, Lenovo will be able to offer its industrial internet of things services, as well as intelligent industrial calculation processes and applications related to quality testing and malfunction prevention to help manufacturers better measure and systematize their big data, another company official said.

Lenovo is spearheading the initiative as it attempts to undergo its own transformation to move beyond its original roots as a personal computer manufacturer. The company has struggled in the last two years as its older PC sales stagnate and its move into smartphones has failed to gain traction. The problems have caused the company’s stock to lose about half of its value over the last two years.