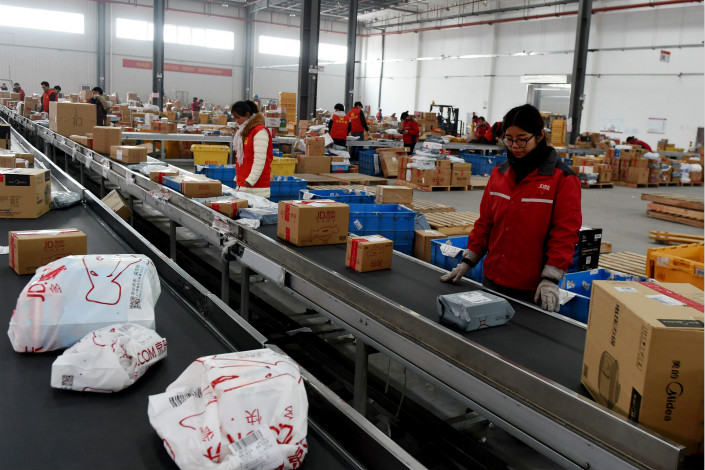 JD.com uses JD Logistics for the delivery of products sold in-house, which account for more than half of the merchandise it sells on its platform, while independent merchants on JD.com usually employ a private courier of their choice. Photo: Visual China

In April, China’s second-largest online retailer spun off its in-house delivery platform into a subsidiary — JD Logistics. Skeptics questioned the necessity of such a move and whether the unit could turn a profit in China’s competitive delivery landscape.

Compared with rival Alibaba’s Tmall and Taobao — which rely on third parties to offer parcel-delivery services — JD.com has long run its own distribution network.

It uses JD Logistics for the delivery of products sold in-house, which account for more than half of the merchandise it sells on its platform, while independent merchants on JD.com usually employ a private courier of their choice.

But “these independent merchants are also increasingly shifting to JD Logistics, which significantly contributed to the increase in revenue,” said Wang Zhenhui, CEO of JD Logistics.

“We hope to elevate our total revenues to reach more than 100 billion yuan, with more than 50% of orders coming from independent merchants and even from other companies,” he added.

But continuing JD.com’s growth in the logistics sector could be challenging. The area is currently dominated by several players including SF Express Co. Ltd. and Shanghai YTO Express Logistics Co. Ltd.

JD.com’s focus on expanding its logistics system also highlights its efforts to improve efficiency and have more control over consumer data.

In July, one of China’s smaller private couriers, Tiantian, accused JD.com of forcing merchants on its platform to refrain from using Tiantian’s services — which the courier called a “severe violation of market order.” JD.com said the decision was spurred by Tiantian’s “poor quality of service.”

Alibaba has also stepped more firmly into the sector. In 2013, Alibaba set up Cainiao to provide logistical support to its merchant partners. In September of this year, the e-commerce giant announced a plan to take full control of and pour 100 billion yuan into Cainiao, aiming to build up a network that can make rapid deliveries anywhere in the world.