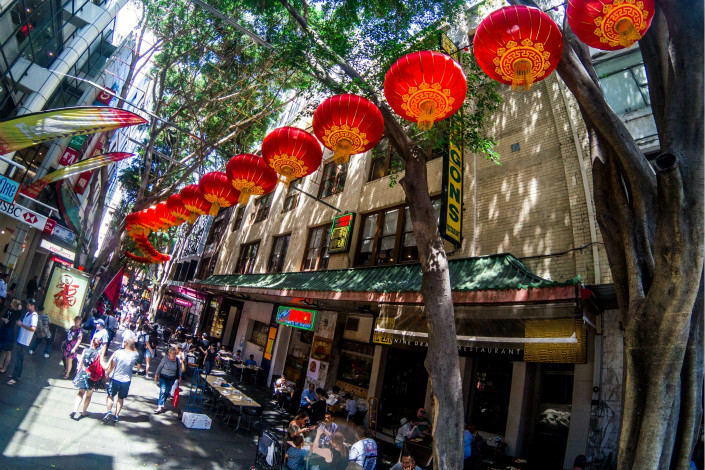 Australian media outlets have launched scathing attacks against the Chinese government over perceived meddling in Australian politics. Above, Lunar New Year is celebrated in Sydney on Jan. 28. Photo: Visual China

The war of words between Beijing and Canberra appears to have escalated as the countries traded barbs over Australian media reports regarding China’s alleged political interference in Australia.

The People’s Daily, the official newspaper of China’s Communist Party, in a commentary published Monday dismissed the allegations as “hysterical paranoia with the hue of racism.”

“The reports in Australian media have been full of imagination, making baseless attacks on the Chinese government and have maliciously slandered Chinese students and people living in Australia,” it said.

The commentary came after the Australian government last week proposed a wide-ranging crackdown on foreign interference in political activity, which Prime Minister Malcolm Turnbull said would not target any one country, but resulted from “disturbing reports” of Chinese influence.

Turnbull cited allegations of Russian meddling in the U.S. election as one justification for reform, according to BBC News.

One focus of meddling accusations has been prominent Senator Sam Dastyari, from the opposition Labor Party, who pledged Monday to resign from Parliament over the damaging revelations. Dastyari had already stepped down from several party leadership positions.

Last year, Dastyari resigned as manager of opposition business in the Senate and shadow spokesman for consumer affairs after media reported he had allowed a Chinese businessman to pay his travel and legal expenses, a “classic case” of foreign interference, according to Turnbull. In November, Dastyari gave up his post as Labor’s deputy whip after he was discovered to have made remarks favorable to China regarding territorial disputes in the South China Sea and had reportedly warned Chinese businessman Huang Xiangmo that government agencies allegedly were tapping his phone.

Turnbull addressed the meddling allegations in a speech last week to Parliament in which he invoked the phrase “The Chinese people have stood up,” rumored to have been spoken by then-Chinese leader Mao Zedong during the founding of the People’s Republic of China in 1949.

Mixing English with Chinese, Turnbull said: “And we stand up and so we say, the Australian people stand up.”

Mao apparently never uttered the phrase “The Chinese people have stood up,” but it was the title of a speech that he gave to the first assembly of China’s top advisory body, the Chinese People’s Political Consultative Conference, on Sept. 21, 1949, according to China.com, a government-owned website.

In response to Turnbull’s remarks on Friday, China’s Ministry of Foreign Affairs said it was shocked by the Australian leader’s remarks, which it said showed a “lack of principle” and “pandered to those irresponsible reports by some Australian media.”

“These groundless and unfounded remarks can sabotage China-Australia relations and are detrimental to the foundation of mutual trust and cooperation,” it said.

A former Australian minister for foreign affairs weighed in on the controversy with his seven suggestions “to tame fears over China,” in which he called for less “stridency.”

In an article he wrote for The Australian newspaper on Tuesday, Bob Carr said now is the time to give the country’s Department of Foreign Affairs and Trade a bigger role and tell the Australian Security and Intelligence to block subversion and arrest spies, “not dribble out messages to the media.”