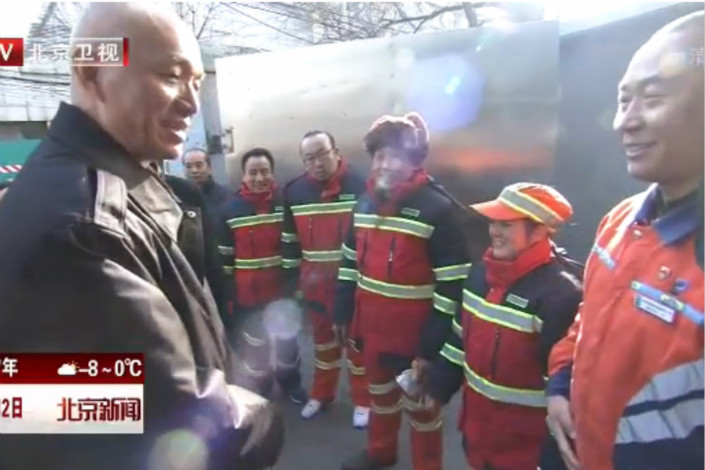 Cai told a couple from Sichuan province who have been working as sanitation workers in Beijing for a decade that they deserve “due respect and gratitude” for their contribution to the community. Photo：Beijing TV

Beijing’s party chief Cai Qi seems to have gone into damage-control mode, briefly meeting with groups of migrant workers on Tuesday to stem the fallout from mass evictions ordered by the government.

Cai, the local party secretary and the de facto head of the Beijing municipal authority, first visited a dispatch center in Chaoyang district owned by SF Express, one of China’s largest courier companies. Most of the delivery workers employed in China’s big cities are out-of-towners.

“Does everybody have a place to stay?” Cai asked the workers, according to Qianlong.com, a news website run by the city government. “What about your income?”

He urged employers to hold themselves more accountable for workers’ wellbeing including offering decent food, accommodation and skills training, according to Qianlong.

The rhetoric represented a stark about-turn in official behavior toward the city’s migrant population who have been the target of hostile evictions, which saw thousands forced out of their homes in sub-zero temperatures after a few hours, or days, of notice.

Cai, along with Beijing Mayor Chen Jining, later visited a garbage collection depot to meet a couple, from the southwestern province of Sichuan, who have worked as street cleaners in the Chinese capital for nearly a decade.

Cai acknowledged that they deserve “due respect and gratitude” for their contribution to the community.

The public relations exercise came amid growing criticism of a government crackdown on “illicit and unsafe buildings” that has emptied several neighborhoods home to mostly migrant families. But it isn’t clear whether it signals a stop to evictions and demolitions or whether the government will change its heavy-handed approach.

The city-wide cleanup was launched by the municipal authority after a deadly fire in the city’s southern district of Daxing, killed 19 on Nov. 18. Officials said the campaign aimed to prevent further safety hazards.

But hundreds of stories of families “tossed out of their homes” trending on Chinese social media have led to an outpouring of sympathy from many civic groups, who have tried to help them find accommodation and other necessities.

But the city authority has ordered many volunteer groups to stop offering temporary shelter or jobs for those displaced, or even a place to store their belongings.

Critics said the campaign is part of a broader government push to ease population pressure on the city by “driving out” street vendors, scrap collectors and factory workers who have come from the countryside in search of work. Beijing had 21.7 million registered residents by end 2016.

Anger among those in neighborhoods earmarked for demolition was evident on Sunday when hundreds gathered in Feijia village for a rare protest, about 20 kilometers (12.4 miles) north of downtown Beijing. Some chanted “violent evictions violate human rights.”

Nearly seven million people, or one-third of Beijing’s population, are migrants with little or no access to many public services including schools, hospitals and state-funded affordable housing programs due to restrictions set by China’s rigid household registration system.

Low-income workers say soaring property prices in the city mean they are left with little choice but to live in buildings that house both apartments and industrial plants or in refitted farm sheds in the outskirts of the city. Many also live in cramped conditions in apartments partitioned with plywood with few fire escapes or other safety features.

The municipal government’s hasty drive to fix rampant safety breaches at substandard facilities suffered another setback on Wednesday. Five people were killed and eight others injured in a blaze at a farmhouse in the city’s Chaoyang district at 1.18 a.m., according to the local fire prevention authority.

An initial investigation said a wire shortage in an electric bike may have caused the blaze. These bikes are popular among migrant workers who use them for the long commutes between their workplaces and homes. The landlord has been arrested, according to Shanghai-based news outlet The Paper. But those who have perished are yet to be identified, it added.

The city government has been embroiled in several controversies since Cai became party secretary in October 2016.

Last month, the government took down thousands of billboards and signboards on storefronts that have stood for decades in an effort “to beautify the city’s sky line,” triggering complaints.