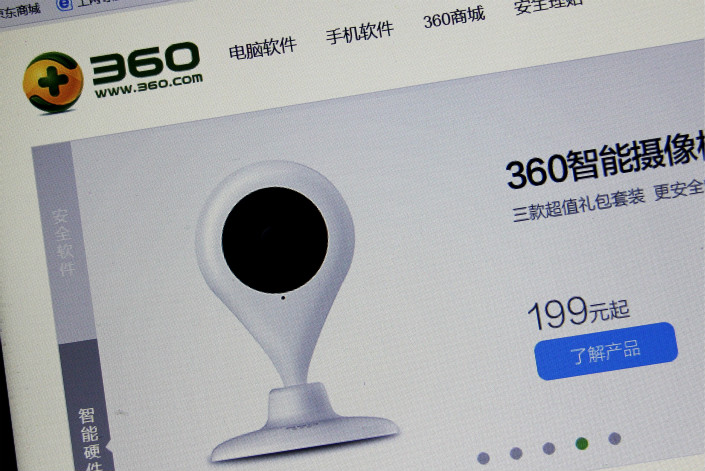 Qihoo 360 Technology Co. Ltd. says businesses that use cameras Qihoo provides for free are required to have prominent notices that the cameras are livestreaming to the internet. Photo: IC

Cybersecurity software developer Qihoo 360 Technology Co. Ltd. is being accused of invasion of privacy for placing cameras in public that livestream to the internet without the knowledge of the people being recorded.

The accusations target surveillance cameras the company has intensely promoted by giving them for free to places such as restaurants and kindergartens (preschools).

Qihoo disputes that it is flagrantly violating people’s privacy, telling Caixin that it required any location that accepted a camera to display a conspicuous notice that the area was being recorded.

But in an online exposé on Monday, blogger Chen Feifei revealed that many such places hadn’t posted any notifications, and some didn’t even know their venues were being livestreamed.

Chen went to a restaurant in southwestern Beijing in which a Qihoo camera broadcast — onto the Qihoo platform — diners ordering and eating. A cashier there said that Qihoo offered the camera for free but that the eatery didn’t know that netizens were watching the camera’s broadcasts.

However, Qihoo said that it has never given free cameras to places other than kindergartens and restaurants, let alone made use of the device to drive traffic on its broadcasting platform.

The cameras installed in kindergartens are encrypted and accessible only to teachers and parents, Qihoo said in a statement. Those in restaurants are in place only to publicize kitchen operations, a campaign that the China Food and Drug Administration initiated in 2016 to improve catering sanitation, the company said.

New York-listed Qihoo was privatized in 2016 by a consortium led by company founder and Chairman Zhou Hongyi. It will soon make a backdoor relisting in China in a deal valued at 50.4 billion yuan ($7.6 billion).