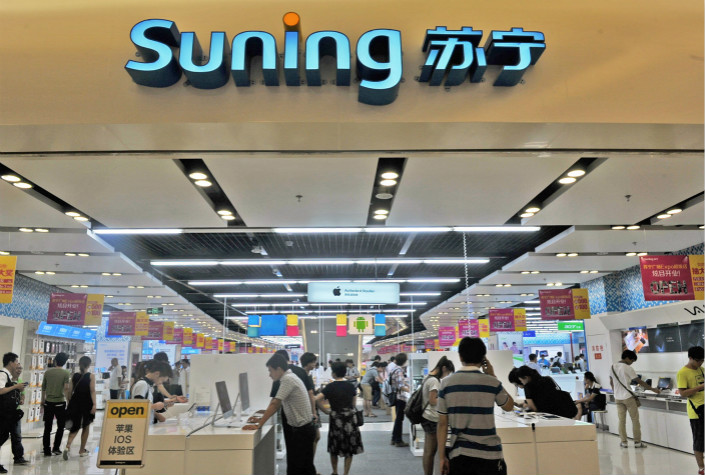 Suning brought its brick-and-mortar assets to its tie-up with Alibaba, while the latter was able to offer its expertise in online retailing. Photo: Visual China

Retail giant Suning Commerce Group Co. Ltd. said it will sell about a fifth of its holdings in strategic partner Alibaba, following a run-up that has seen the latter’s stock double this year.

Suning and Alibaba formed a strategic tie-up two years ago, pooling their complementary assets in traditional brick-and-mortar and online retailing, respectively. Under that deal, Alibaba agreed to buy about 20% of Suning’s shares for 28.3 billion yuan ($4.3 billion). Suning said it would buy up to 27.8 million Alibaba ordinary shares, representing 1.1% of its total stock, for up to 14 billion yuan.

In its latest announcement filed on Tuesday, Suning said it plans to sell 5.5 million of its Alibaba shares, representing nearly 21% of its total holdings in the company, for about $940 million. Suning said it expects to realize about 3.25 billion yuan in profit from the sale.

Alibaba’s share price has more than doubled since Suning first made the investment in August 2015, including a doubling this year on bullishness about the company’s prospects in China’s vast e-commerce market.

“Proceeds from this sale will be used to support innovation in the company’s business ecosystem, as well as for upgrading the company’s logistics ability and research and development,” Suning said in its statement. “This should help to effectively raise the company’s competitiveness.”

Alibaba shares fell 2.6% in the latest trading session on Wall Street. The stock is down more than 8% over the last three weeks, as investors like Suning take profits following a run-up that saw the stock more than double this year. Even after the sell-off, the stock is still up nearly 100% since January.

Suning stressed that Alibaba is still its strategic partner, and continues to hold 20% of Suning’s shares. It said that after the sale, it would continue to own about 20.8 million Alibaba shares, equivalent to about 0.81% of the e-commerce giant’s total stock.