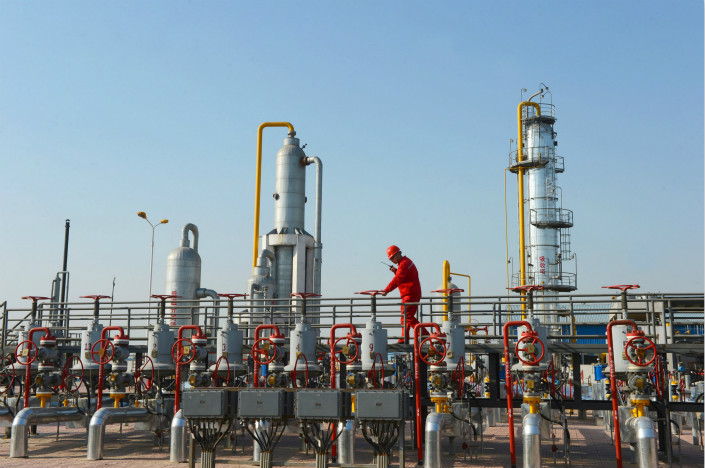 Hunan province says it expects a 26% shortage of natural gas this winter due to "a drastic increase in demand for natural gas nationwide and stagnant supply." Above, a petrochemical gas storage facility is seen in Puyang, Henan province, in April 2014. Photo: Visual China

A natural gas shortage — created by a drive to curb coal use that has left northern China shivering — is spreading to other parts of the country, triggering a supply-crunch alert in a central province.

Hunan’s economic planning body issued a yellow natural gas alert, the third rung on a four-tier color-coded warning system, indicating that the region is likely to face a 10% to 20% shortage this winter.

The provincial government also called an emergency meeting last week to address the looming shortage, according to an emergency notice from the Hunan Economic and Information Technology Commission that was viewed by Caixin.

The commission attributed the problem to “a spillover effect from a drastic increase in demand for natural gas nationwide and stagnant supply.”

The advisory came just days after the northern province of Hebei admitted it had underestimated — by 700,000 — the number of households that needed to switch from coal-heating to natural gas or electricity as part of a clampdown on dirty coal, which aims to clear the air in northern China this year.

As a result of the enforced conversion, demand for natural gas during the icy northern winter is expected to more than double from the previous winter to 8.2 billion cubic meters (289.6 billion cubic feet), according to the provincial government. The province is likely to face a 26% shortage from mid-November to mid-March.

Several other provinces, including Shandong in the east, Henan and Hubei in central China and Shaanxi in the northwest, are also struggling to meet demand for natural gas to different degrees, according to Caixin investigations in recent weeks.

The short supply of natural gas has claimed its first high-profile victim after a subsidiary of German chemical giant BASF SE in the southwestern municipality of Chongqing announced Tuesday it is suspending the production of MDI, a chemical widely used in insulation and ceramic manufacturing, as its supplier cannot now meet its needs for natural-gas-based material.

Chongqing Chemical & Pharmaceutical Holding Co., which sources natural gas from the state-owned China National Petroleum Corp., mixes natural gas with other chemicals before providing it to the BASF subsidiary.

The suspension is indefinite, and some workers at the BASF plant “are ready to go home for some rest,” according to a BASF executive.

All chemical and fertilizer companies in Chongqing and the southern provinces of Sichuan and Yunnan have received notifications from the CNPC and China Petroleum & Chemical Corp. — China’s largest oil and gas firms — informing them that deliveries of natural gas will be suspended from Dec. 8 as the companies need to prioritize supplies to northern China, according to media reports.