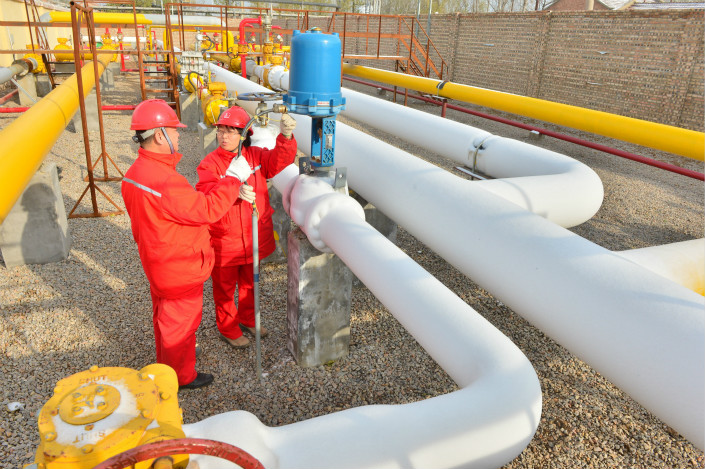 The supply crunch has led to a surge in domestic natural gas prices. The onshore price of liquefied natural gas in northern China has nearly doubled over the past three months to between 6,000 yuan ($906) and 8,000 yuan per ton. Photo: IC

China says it wants to keep its people warm and use more clean energy, but is having trouble doing both as a natural gas shortage that has left thousands shivering in northern China spreads to more parts of the country.

“We must increase the use of clean energy and ensure people have sufficient winter heating,” the National Energy Administration (NEA) said Thursday in a 13-point guideline.

The NEA made it clear that people in remote mountain areas could use alternative fuel sources such as biofuels and “clean coal” — a type of coal-powered energy that produces less pollution — for heating if they had been unable to replace their coal-fired heating systems with ones fueled by more environmentally friendly sources.

The natural gas shortage began last month after the government aggressively pushed a program to replace coal-fired heating with systems powered by natural gas or electricity in smoggy northern China. The National Development and Reform Commission’s Hebei province branch warned that the gas supply there would run short of demand by 10% to 20% starting on Nov. 28.

The supply crunch has led to a surge in domestic natural gas prices. The onshore price of liquefied natural gas in northern China has nearly doubled over the past three months to between 6,000 yuan ($906) and 8,000 yuan per ton.

As the natural gas shortage deepens beyond North China and disseminated into the central province of Hunan, authorities scrambled to wind back some policies and give a little leeway to areas that still need to burn coal for heating.

The NEA said local governments should accelerate the construction of green infrastructure, including natural gas pipelines and heating networks, and get them operating as quickly as possible. It also urged the local NEA branches to continue with the coal-to-natural gas shift based on precise calculations of the gas supply.

The NEA also said that ready-to-use coal-fired co-generation plants, which are power stations that generate heat along with electricity, should be brought online as a backup for heating systems that run on natural gas or electricity, even if those plants are not slated to start operations soon.

It also demanded that local governments give more financial support to clean heating projects. The agency asked that rural areas close to key cities that have been tasked with fighting pollution receive the same amount of government subsidies for construction of clean energy projects.