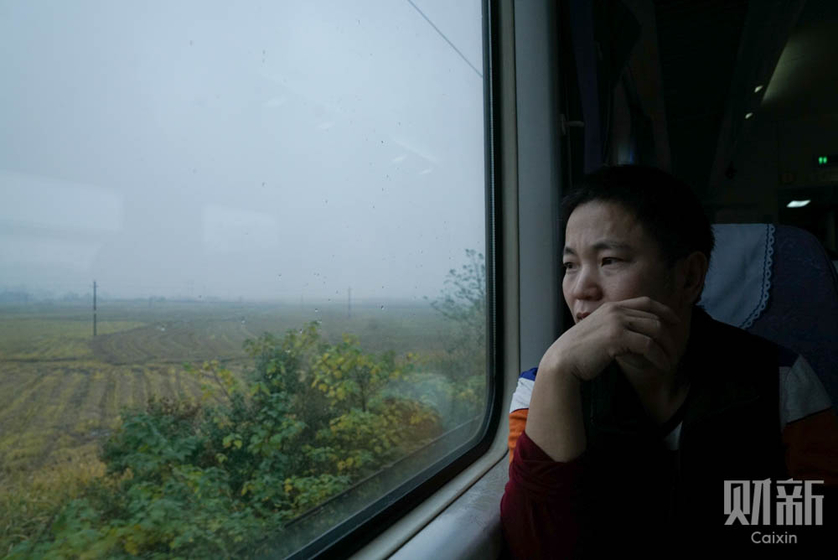 Li Rungou decided to leave Beijing amid a wave of demolitions after a fatal fire in his neighborhood left him both homeless and jobless. After returning to his hometown, he took a three-hour train trip to the city of Nanchang, Jiangxi province, to take a job. Li said he was lucky to find work two days after leaving Beijing. “Although the country has developed so quickly, people like me, we can’t feel the change,” he added. Photo: Liang Yingfei/Caixi

When Li Rungou got a call from his wife on Nov. 18, saying there was smoke coming out of the building next door, his first question was: “Is our daughter safe?”

When he rushed to the scene, his apartment complex was already cordoned off. His wife, who was cooking dinner at the time, had managed to escape with their 1-year-old. But little did he realize then, that he would be left both homeless and jobless within days and would have to leave Beijing after 15 years in the city.

Li’s family lived in a three-story building, packed like a honeycomb with 200 small rooms, partitioned with plywood. The fatal fire that killed 19 and injured eight others led to a wave of demolitions as authorities targeted unsafe or illicit buildings in Xinjian village in Daxing, a suburb in southern Beijing. Li said he only had time to grab three cans of infant formula, a change of clothes and a few small things when he was given about 20 minutes to gather his belongings. The crackdown quickly spread to other parts of the Chinese capital, with tens of thousands evicted within days of receiving notice.

Li, who worked in a garment factory in the area, said he was sleeping in his dorm with 10 others on the night of the fire, while his wife and daughter stayed with his mother-in-law, another migrant laborer. But two days later, when his boss received a notice saying the factory would be torn down, Li had to cram into his mother-in-law’s 5-square-meter room. Li said he was left with little choice other than to return to his mother’s home in Matian village, Jiangxi province.

“When I first came to Beijing I had a lot of hope. I thought, wow, this is the capital!” the 42-year-old said. “I dreamed of having a house in the city and my own vehicle running on the roads of Beijing. I felt it would be a beautiful life. But that’s just an illusion. The feeling that Beijing could be my second home has vanished completely from my heart.”

Li’s homecoming has been a rough one. Matian village, with just over 10,000 residents, is dotted with brick kilns and coal mines. Many, like Li, who were either unable to find work or were dissatisfied with the low pay in the village had all migrated to the city.

Over the past 15 years, he had only returned home for the Spring Festival, and was now trying to rekindle old connections and friendships that have been dormant for years.

Soon after coming back, Li headed to the local employment services center, which helped him find a job, ironing t-shirts, in a factory for children’s wear. The work is similar to what he did in Beijing, but Liu says now he earns less.

He has to feed his family and support his mother, who suffers from a mental illness, on his daily earnings of about 140 yuan. In a good month, he makes about 4,000 yuan.

Li now shares a 10-square-meter dorm room with three others at the factory in Nanchang, a city that is a three-hour train ride from his village.

“I feel that today’s society is like a fast train, and people like us can’t get on,” Li said. “I hope that our children could better adapt to this pace (of development).”

There are no statistics on the number of workers choosing to return home as whole swaths of predominantly migrant neighborhoods in Beijing are being emptied out. But some, like Liu, with no land or experience farming, are raising concerns about the future of China’s rural workers as more big cities take steps to curb migration.