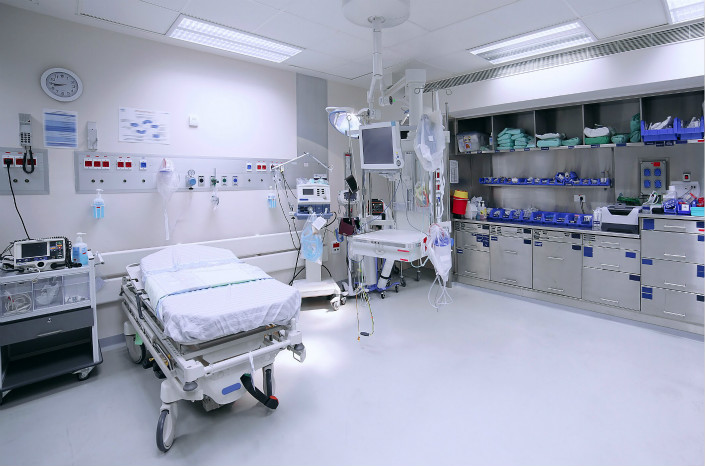 A dentist from Beijing Anzhen Hospital, with the Weibo username PRND21, said his hospital stopped using most styptic materials — which help close blood vessels during surgery — leaving only alternatives that are “as effective as garbage.” Photo: Visual China

Some hospitals in China have restricted the use of certain disposable medical equipment — such as surgical sutures and hemostatic gauze — in an attempt to meet annual cost-control targets at year-end.

In a memo obtained by Caixin, one hospital in southwest China’s Sichuan province told staff to “strictly control the use of surgical consumables that aren’t directly related to the efficacy of the operation. Stop using all types of wound irrigations, anti-adhesion irrigation, hemostatic gauze, styptic powder and so on by the year-end.”

Similar orders have circulated at hospitals in other places across the country. He Zhen, a doctor from Henan Cancer Hospital in the central province of Henan, posted Monday on his Sina Weibo social media account that all consumables — disposable items — were restricted at his hospital, and a disposable kit to treat certain diseases of the thorax was out of stock.

A dentist from Beijing Anzhen Hospital, with the Weibo username PRND21, said his hospital stopped using most styptic materials — which help close blood vessels during surgery — leaving only alternatives that are “as effective as garbage.”

“The number of surgeries has dramatically dropped recently,” he said.

Government subsidies for public hospitals accounted for 9.2% in 2015, up from 8.1% a year before, according to the National Health and Family Planning Commission.

In late 2015, the commission demanded that hospitals cut costs. And this year, the State Council quantified that rule, speculating that the annual growth of costs at all public hospitals couldn’t exceed 10%.

Pressures to meet that target have passed from the central government to provincial ones, and to hospitals and their doctors. In November, Sichuan found that its hospitals cost 13.15% more than in the same period last year, and told hospitals to urgently control costs or have their staff’s annual bonuses reduced by 20%, according to another internal document from a Sichuan hospital obtained by Caixin.

The hospital document also said to “in principle use domestic-made consumables only.”

Consumables have been the first items restricted because they are relatively costly, accounting for 64% of total surgery costs in 2013, according to a 2015 article published in the journal Chinese Hospital Management.

Some doctors are in favor of the move. “Some highly-valued consumables and drugs have limited efficacy, and it is better to apply the money to people in need,” said a doctor surnamed Wang from a top-tier hospital in Sichuan.