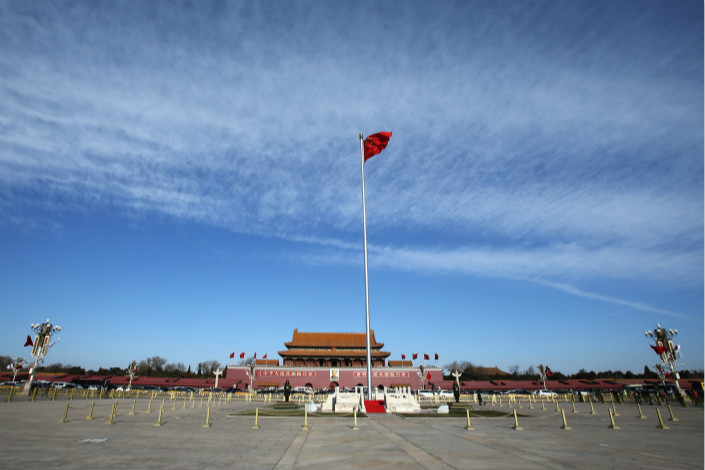 The overall air quality in the Beijing-Tianjin-Hebei region, home to 8% of China’s population, has slightly deteriorated this year. Photo: Visual China

The Chinese capital had 202 blue sky days from January through November, up 3.8% points compared to last year, the Ministry of Environmental Protection (MEP) said Friday. The average level of cancer-causing PM2.5 particulates in the air was also down by 13.4% to 58 micrograms per cubic meter of air over the 11-month period.

Health risks are posed when the 24-hour mean level of PM2.5 exceeds 25 micrograms per cubic meter, according to the World Health Organization, and there is “no safe threshold” for the toxic pollutant.

Despite the capital’s improvements, six cities near Beijing — located in neighboring Hebei province — have some of the dirtiest air in the country.

The overall air quality in the Beijing-Tianjin-Hebei region, home to 8% of China’s population, has slightly deteriorated this year.

Almost half the days from January through November were polluted, and the number of blue sky days in the region slid 3.7 percentage points to 186 days.

The worrying numbers were released as China’s four-year clean air campaign launched in 2013 is expected to wrap up by year end.

Authorities’ attempts to push millions of rural families to give up coal in recent months have backfired amid poor planning and a gas shortage that has left thousands without heat in subzero temperatures.

The supply crunch has spread to other regions as state-owned natural gas suppliers were ordered to prioritize supplies to northern regions including the Chinese capital.

But the aggressive clampdown on coal use meant the Beijing-Tianjin-Hebei area had 9 1/2 more blue sky days in November, compared to the previous year, bringing the total number of days when the air quality reading was less than 100 to 20.5 days on average, official data showed. The number of blue-sky days in the Chinese capital went up by more than one-third to 24 days in November.

Meanwhile, much of northern China has been blanketed by a bout of moderate to heavy smog since Thursday, which is expected to last until Saturday due to a lack of strong wind, the MEP said.