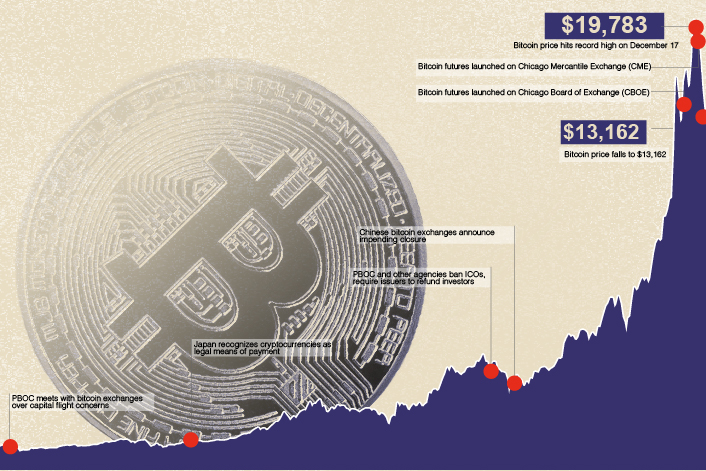 Major operators have set up new trading platforms offshore, some of which are still accessible to Chinese investors. Others are shifting their focus to technology research and consulting.

When domestic platforms were shuttered, nearly a fifth of bitcoin trading worldwide was conducted in the Chinese yuan. But the regulatory clampdown — first on initial coin offerings and then exchange trading — have done little to dampen enthusiasm for the cryptocurrency amid global euphoria for the virtual asset, with major exchanges finding new business lines and forging partnerships overseas.

Huobi, one of China’s top three bitcoin exchanges by market share before the government ban, partnered with Japanese financial company SBI Holdings in early December to set up two exchanges in Japan. The Chinese company is also working to set up an exchange platform in South Korea, said Huobi Chief Operating Officer Zhu Jiawei, adding that the launch was “imminent.”

“When the internet first arrived, there were many negative voices, but its development was unstoppable. I think it is the same for bitcoin and blockchain technology,” Zhu said.

OKCoin has also focused more energy on a subsidiary, OKEx, based in Belize.

OKEx allows Chinese citizens to purchase cryptocurrencies using yuan through its over-the-counter (OTC) trading platform, among other services. The company raised tens of millions of dollars in mid-December from online game developer Giant Network, representing OKCoin, its parent company’s largest round of financing since it was founded in 2013, according to data provider ITJuzi.

Huobi, on the other hand, also offers an OTC platform through Singapore-based Huobi Pro, allowing Chinese traders to purchase cryptocurrencies through local payment methods, including Alipay and WeChat Pay.

OTC trading of cryptocurrencies is not new in China. During the temporary halt on bitcoin withdrawals at China’s major bitcoin exchanges from February to June on capital outflow concerns, the country’s largest cryptocurrency OTC operator at the time, BitKan, saw its user base grow over tenfold, a company spokesperson told Caixin.

Exchange operators have also found new business lines in the heated market. Huobi, for example, has moved into assessing global blockchain and cryptocurrency assets to make recommendations to investors.

BitKan has sealed cooperation agreements with more than 20 media organizations worldwide and shifted its focus to being an industry news and information provider.

The astronomical gains of bitcoin prices are seen as a reason why these Chinese bitcoin exchange operators continue to find business. The price of bitcoin, however, has taken a hit in recent days, tumbling over 30% from its record high of $19,783 less than a week ago. On Friday afternoon in Beijing, it was trading at $13,162, according to Coindesk’s bitcoin price index.

The reason for the plunge is not immediately clear. Industry sources have pointed to reasons that include recent cyberheists involving tens of millions of dollars’ worth of bitcoin, and the innate volatility of the virtual asset.