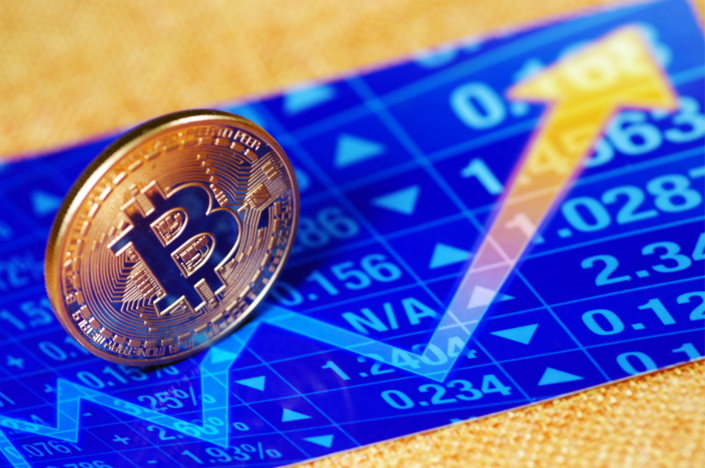 The collective value of all bitcoins has leapt more than 17-fold this year, surpassing the $286.7 billion market capitalization of Wal-Mart Stores Inc. Photo: Visual China

Bitcoin price has nearly doubled over just the past week and now stands at $17,154, boosting its market value to $286.9 billion, according to data providers Coindesk and CoinMarketCap. The collective value of all bitcoins has been up more than 17-fold since the beginning of this year, and has surpassed U.S. hypermarket operator Walmart’s $286.7 billion market capitalization.

The global mania doesn’t seem to be losing steam, despite repeated regulatory blows — especially in China — since the third quarter.

Bitcoin derivatives will likely attract more heavyweight investors, which will gradually reduce the cryptocurrency’s volatility, as well as increase its liquidity and steady its exchange rate with fiat currencies, said Wang Liren, senior researcher at the China Blockchain Research Alliance, in an earlier interview.

During a conference held by media company Yicai and J.P. Morgan last week, Pan Gongsheng, a deputy governor at the People’s Bank of China, said the government “did the right thing” by shutting down domestic bitcoin exchanges a few months ago.

Pan cited an article written by Eric Pichet, a professor at the KEDGE Business School in France, who argued that bitcoin is simply the latest incarnation of speculative frenzies just like the tulip craze in the 1637 and the internet bubble in 2000.

“No one can predict how long a speculative frenzy will last and when it will peak,” wrote Pichet, concluding that “there is only one thing left to do: sit by the lake to watch the corpse of bitcoin float by one day in the future.”

Pan told the conference: “If the government hadn’t shut down bitcoin exchanges and banned fundraising through initial coin offerings months ago; if trading in China still accounted for over 80% of global bitcoin trading like it did earlier this year … it scares me to think what the scene would look like today.”

China was the first country to ban initial coin offerings, where companies sought to raise funds by offering new cryptocurrencies, as the government deemed the practice illegal in early September. Shortly thereafter, Chinese cryptocurrency exchanges announced their imminent or impending closure, as supervisory agencies widened their regulatory scope. All Chinese bitcoin exchanges were shuttered by the end of October.