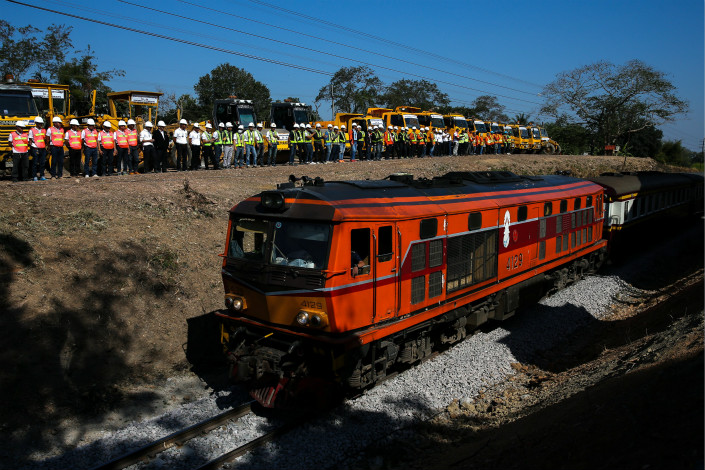 The railway, which runs from Bangkok to the Thai province in Nakhon Ratchasima, is part of a mega-project that will connect the Thai capital with southwestern China’s Yunnan province via Laos. Photo: Visual China

After years of delays, ground was broken on the China-Thailand railway project Thursday afternoon in the central Thai province of Nakhon Ratchasima.

The 253-kilometer (157-mile) railway starting in Bangkok and ending in Nakhon Ratchasima, is part of a mega-project that will connect the Thai capital with the southwestern Chinese province of Yunnan via Laos.

The line between the Lao capital Vientiane and the Yunnan provincial capital of Kunming, which is under construction, is set to open in 2022.

Thai Prime Minister Prayut Chan-o-cha, who attended the groundbreaking ceremony, said that the project is in line with the Belt and Road initiative and will bring development opportunities to areas along the railway, according to China’s state-run Xinhua News Agency.

On the same day, Chinese Prime Minister Li Keqiang said in a congratulatory letter that the railway is a flagship project in the spirit of “wide consultation, joint construction and shared benefits,” Xinhua reported.

The two countries struck a deal to jointly construct the railway in 2013. But the rail-for-rice plan — in which Thailand would partly pay for the project with the foodstuff — soon derailed after then-Thai Prime Minister Yingluck Shinawatra stepped down in 2014 following charges of abuse of power, a move that was swiftly followed by a coup d’etat led by then army commander Prayut.

Discussion of the project resumed in 2015. The two sides held at least 22 meetings and rumors repeatedly surfaced about the start of construction, but a final agreement proved elusive due to financing issues the Thai government found the loan that China offered came with an unacceptably high interest rate.

In 2016, Thailand announced it would pay for the railway itself, rather than borrowing from China. In August 2017, the Chinese Embassy in Thailand said in a statement that negotiations over the contract for the Bangkok-Nakhon Ratchasima line had finished.

Thailand will be responsible for the construction of the project and will use as much domestically made equipment and raw materials as possible, while China — which will focus on design and supervision — will employ many Thai engineers and architects, according to the embassy’s statement.

“China … will provide necessary high-speed rail technology to the Thai side,” the statement said.

The details of how the project was funded were not disclosed.

This story has been corrected to fix a map that misrepresented the location of the railway line.