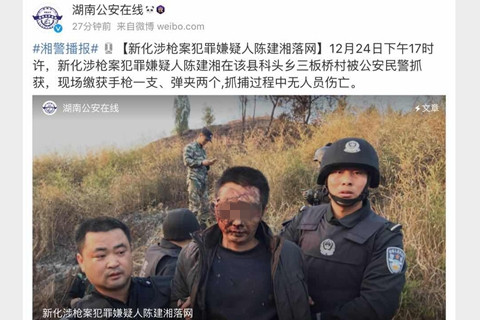 A police officer suspected of killing two men in Xinhua county, Hunan province, was arrested on Sunday after a two-day manhunt.

Chen Jianxiang was apprehended in the town of Ketou, provincial police said. He was carrying a firearm and an unspecified quantity of ammunition, authorities said, without identifying the weapon.

Chen, 46, has been on the run since Friday night after he gunned down an employee of the Xinhua County Education Bureau and an unemployed man, authorities said. News of the killings went viral on Chinese social media. Violent gun crime in the country is rare because civilians aren’t allowed to own guns.

Chen, who has served in the county police for over two decades, had borrowed the firearm from his colleagues because his gun license had been revoked a decade earlier, another officer said.

Hunan police launched a massive manhunt involving hundreds of officers and announced a 100,000 yuan ($15,200) reward for any information on Chen’s whereabouts.

Police said they haven’t identified a motive for the killings so far.

Chen was carrying a will with names of those who had “messed with him,” according to a source who had been briefed on the ongoing investigation. Chen intended to target a deputy head of the county police force, according to the source.