China Struggles to Reel In Its Illegal Fishing Abroad 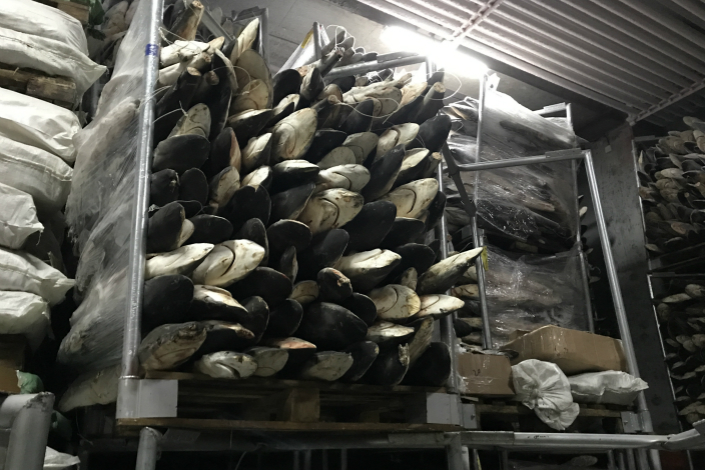 A heap of de-finned sharks stands in an aquatic products trading center on Sept. 13 in Fuzhou, East China’s Fujian province. The sharks were caught a year ago by fishermen on a boat from East China’s Shandong province, according the center’s manager. Photo: Zhou Chen/Caixin

In August, a Chinese reefer ship was detained by Ecuadorean authorities within the ecologically rich Galapagos Marine reserve with a gruesome haul onboard — 6,223 shark carcasses.

Crew members of the ship — named the Fu Yuan Yu Leng 999 — appealed criminal charges filed in a Galapagos court, but in November, judges in Ecuador’s Guayas province maintained that the captain and crew were guilty of the possession and transport of protected species.

While Fu Yuan Yu Leng 999’s catch was shockingly large, the factors behind the incident have allowed illegal, unregulated, and unreported fishing to become an increasingly common practice.

Nearly two-thirds of the world’s oceans are international waters. In 1982, the United Nations passed the Convention on the Law of the Sea, which China signed in late 1996. This convention — together with the U.N.’s agreement on stocks that span multiple countries’ jurisdictions in 1995 — marked the beginning of legally binding norms for the conservation and management of international fishing resources.

But decades later, international organizations and the law enforcement agencies of different countries still struggle to coordinate their supervision of fishing activity. For China, the problem of illegal fishing has been exacerbated by the depletion of domestic fish stock and the difficulty of monitoring distant ocean fishing by Chinese companies.

China’s fishing industry has expanded rapidly in recent decades, mirroring the country’s economic growth. Between 1986 and 1996, the annual catch from waters off the coast of China grew from 4.5 million tons to 11.53 million, with an average annual increase of 10.4%.

But amid rising demand, the domestic fish stock — the fish within China’s territorial waters — has declined, prompting more companies to look farther abroad to waters around South America, Africa and Oceania, where their activity is harder to monitor.

“In the past 20 to 30 years, China’s offshore fishing resources have deteriorated,” said Yu Kangzhen, China’s vice minister of agriculture, at a November event in Hangzhou. “Inevitably, a large number of fisheries have to travel to increasingly distant locations for their catch.”

This shift to fishing in deeper waters has received encouragement from China’s government at both the central and local levels. In 2008, the third plenary session of the 17th Central Committee of the Communist Party of China explicitly declared support for expanding distant-water fishing. Local governments soon rushed to offer incentives like shipbuilding and fuel subsidies, and coastal provinces like Fujian, Shandong, and Zhejiang saw their number of distant-water fishing boats multiply significantly. By 2014, the total number of such vessels registered in China was 2,460, or 301 more than in the previous year — with the country’s total distant-water fishery production volume up 50%.

China now catches the most fish in the world, accounting for over a third of the world’s fishing volume, according to figures from the United Nations Food and Agriculture Organization.

China has been scrambling to deal with the growing geographic scope of its fishing industry, but the recent Galapagos case shows it has a long way to go.

“The country has taken a series of measures to strengthen management of fisheries, including the implementation of a fishing license system, maritime law enforcement and port inspection measures, and the establishment of a monitoring system for large- and medium-sized fishing vessels,” the Bureau of Fisheries told Caixin after the Fu Yuan Yu Leng 999 was detained. “For deep-sea fishing vessels, we also use standardized logbooks, accredited observers, monthly output reports, legal fishing certification, annual reviews, and other measures.”

But Xue Guifang, a professor of law at the Shanghai Jiaotong University, told Caixin that “because deep sea fishing is conducted in distant waters, it is very difficult to monitor the fishing activity.” She said the Agriculture Ministry’s January 2015 policy on monitoring ships’ locations was an example of a regulation that distant vessels could easily bypass. According to the regulation, automatic position-monitoring equipment on ships can legally be out of service during repairs for up to 60 days. During this period, there is no way to automatically report a ship’s position, so crew are required to manually write reports.

“It’s common for crew to take advantage of this kind of regulation, to use a system fault as an excuse to avoid monitoring, and to engage in illegal fishing activities,” Xue said.

Xue said it is important for the government to put further technical and legal measures in place to protect observers. “Observers carrying out their tasks will come into conflict with fisheries’ interests,” Xue said.

Onboard ships, “it is difficult to have the same strength of law enforcement as on land,” Xue said. “So observers’ personal safety is often at risk, and it’s difficult for them to conscientiously and thoroughly perform their duties. We can learn from the experience of other countries and install probes on ships, carry out tracking of the status of observers’ work, and make use of these safeguards to avoid compromising effectiveness.”

Another solution could be to limit the growth of Chinese distant-water fishing. The Agriculture Ministry now plans to shift from rapid development of the fishing industry to “orderly development,” according to the 13th Five-Year Plan it published in early December. The ministry aims to cap China’s distant-water fishing fleet at 3,000 vessels by the year 2020, with “zero growth” in the number of fishery businesses.

Ocean fisheries have also begun to change their business models. Fuzhou Hongdong Pelagic Fishery Co. Ltd. is currently focusing on building infrastructure, such as wharves, processing plants, and shipyards, in addition to developing its overseas fishing business, the secretary of its board of directors told Caixin.

“You can’t rely on catching fish alone. Others will feel that you are looting resources,” he said.