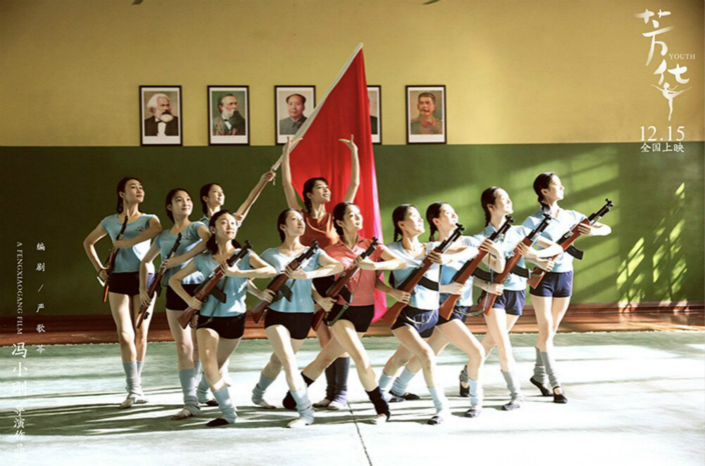 A poster for Feng Xiaogang’s latest movie, “Youth,” shows dancers in a military art troupe rehearsing a Mao-era propaganda ballet. The film follows the fates of these young performers through the turbulent years of the Cultural Revolution and the decades of change that followed, as China opened up to the world. Photo: Visual China

How did a tear-jerker on the Cultural Revolution beat Pixar’s animated film “Coco” at the Chinese box office, which is usually dominated by big-budget, popcorn films?

Award-winning director Feng Xiaogang’s “Youth” – which follows the lives of a dancer running away from her father’s political sins and a soldier fighting in the Sino-Vietnamese war – has become a hit among moviegoers above age 40, a group that is usually missing from cinemas.

The film raked in $48 million during its opening weekend, nearly 30% higher than the figure for “Coco,” and has remained the top grossing movie since it debuted on Dec. 15, according to film consulting firm Artisan Gateway.

“The 1970’s propaganda music in the soundtrack reminds me of my youth and of what our families went through,” said Li Jincai, a 53-year-old security guard, as he walked out of a theater in Beijing’s Dongdaqiao area. “It makes me feel nostalgic.”

The story, adapted from a semi-autobiographical novel by Yan Gelin, opens with the tantrums of young dancers who are part of a military performance troupe. He Xiaoping (played by Miao Miao) is the troupe’s new girl, determined to make a fresh start after her father is branded a “Rightist” and thrown into a re-education camp. But, she is constantly bullied for her lack of “red roots” and sophistication. In one scene, her peers try to grope her breasts because they suspect she has padded her bra with a kitchen sponge.

Xiaoping’s sole defender is “model soldier” Liu Feng (Huang Xuan), who is falsely accused of sexual harassment and reassigned to a border post before being sent away to fight in China’s war with Vietnam.

“The false allegations in the film are reminiscent of tactics used during the Cultural Revolution to destroy someone’s career,” wrote one Weibo user under the pseudonym Sigangfeng. “The film is full of such references to rotten things that happened in that era, which can be overlooked by those who didn’t live through it.”

But these subtle hints were too strong for China’s censors. The film was originally set to debut on Oct. 1, but authorities abruptly pulled the plug without any explanation just days prior to the release. Industry insiders said scenes touching on the politically sensitive Sino-Vietnamese War of 1979 had unnerved regulators, while others said censors were nervous about releasing a film that didn’t portray the Communist Party in a flattering light ahead of the all-important National Party Congress.

Although director Feng couched the impact of the Cultural Revolution and the goriness of war in Mao-era song and dance, the version being screened now is 12 minutes shorter than the one that premiered at the Toronto Film Festival on Sept. 28.

During a screening at film festival in Pingyao in late October, Feng said the “new edit” was an effort to "sharpen the film's rhythm."

But, it is widely seen as a compromise by the veteran filmmaker, who needed to appease regulators while trying to retain as much of the original punch as possible.

Feng, who is often called China’s Spielberg, was named best director at the Golden Horse Awards in Taipei last year for his film “I Am Not Madame Bovary.” The minimalist film, which lampoons China’s one-child policy, also beat Hollywood blockbusters at the box office earlier this year.

But the director’s latest attempt to cover swaths of China’s modern history with broad brushstrokes rings hollow at times, because he doesn’t take time to delve deep into particular issues.

One of the film’s few references to China’s chaotic early days after it opened up to foreign trade is a scene in which a soldier walks past a bright red billboard advertising Coca-Cola instead of Communist slogans. In another scene, the audience is told that the war with Vietnam – the futility of which is a key theme of the film – was merely a battle fought on China’s southwest border, and the regional tensions that sparked the conflict have been left out.

Feng walks the tightrope of Chinese history with a showman’s flair, but often resorts to jarring jumps in the plot. “At times the story seems to move from one era to the next without an explanation,” said moviegoer Gan Sumei. “But I think the director was quite bold when he included a shot where a disabled war veteran was manhandled by thugs from the Lianfangdui after he fails to bribe them.”

The Lianfangdui is a controversial team of civilians recruited to assist the police. The force is notorious for slapping exorbitant fines for minor offenses like dumping garbage in public places, and is slowly being phased out.

Despite its deft social criticism, Feng has said the film was more an attempt to relive his own memories of the time when he designed sets for a military dance troupe in the late 1970s. In his 2011 autobiography, “I Devote my Youth to You,” Feng wrote, “I’ve always wanted to make a film about my obsession with a female soldier at the time.”