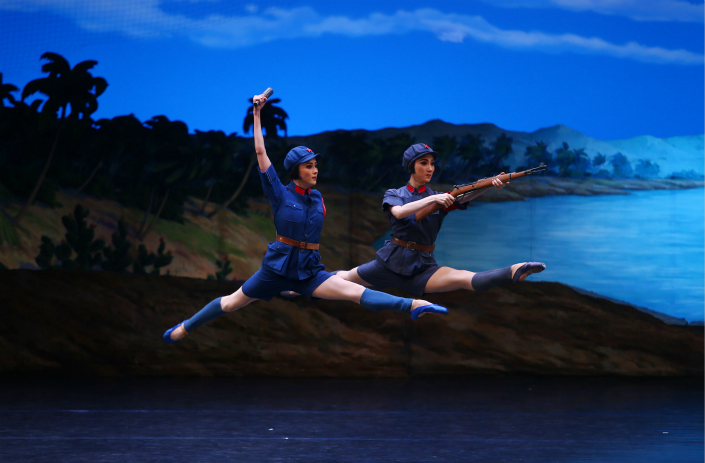 China’s National Ballet slammed “inferior judges who have undermined justice” after a court ruled it had failed to give credit and pay royalties to the screenwriter of a classic production.

The state-run art troupe has been in a long-running legal battle with the family of Liang Xin, a renowned scriptwriter behind the 1961 classic film “Red Detachment of Women,” which was later adapted to stage. It’s widely known in the West as the ballet performed for U.S. President Richard Nixon during his historic visit to China in 1972.

The National Ballet, in a strongly worded statement on Tuesday that was later deleted, dismissed the ruling, handed down by a lower court and upheld by higher courts in the Chinese capital, saying it was flawed.

“Inferior judges have gone against party policies and principles and the law by handing out self-contradictory and absurd verdicts with little regard for the truth,” the ballet said in a post on its verified WeChat account. “We’re wondering which law school these unqualified judges attended because they’ve done a poor job.”

This rare blistering criticism caused unease among many because the comments were reminiscent of the rhetoric that undermined the judiciary during the Cultural Revolution of 1966-76. The National Ballet has also drawn fire over its failure to safeguard intellectual property rights, despite being a top state-sanctioned art troupe.

The “red classic,” which has been a fixture in the National Ballet’s repertoire since the mid-’60s, follows a peasant girl and her peers in China’s southern island province of Hainan, where women — aided by the Communist Party — rose against feudalistic suppression.

Scriptwriter Liang and his family took the National Ballet to court in May 2015, demanding 550,000 yuan ($90,000 at the time) in compensation, legal costs, and a public apology over failure to honor an agreement signed in June 1993. Under the agreement, the dance troupe had to give Liang credit in performances and a one-time token payment of 5,000 yuan. Liang died earlier in 2017, but his family has pressed on with the case.

In mid-2015, the district court ordered the art troupe to pay the family 120,000 yuan in total compensation and issue an apology. The verdict was upheld during an appeal by both parties at the Beijing People’s Intellectual Property Rights Court in December 2015.

However, the ballet troupe repeatedly ignored an enforcement order from the Xicheng district issued in May 2016, and it lodged an application for a retrial at the city’s top court, the Beijing People’s High Court, in October 2017. But the high court didn’t support this request.

Xicheng District Court ordered the bank, where the National Ballet’s funds are kept, to transfer nearly 140,000 yuan ($21,540) — including compensation, due interest payments and trial expenses — from the art troupe’s account to the scriptwriter’s family on Dec. 28 after the dance company refused to comply with a fresh enforcement order issued last week.

In a statement on Tuesday, the Xicheng district court said it will continue to push for a written apology as part of its enforcement order. It was mum on the National Ballet’s post questioning judicial integrity.

But the Supreme People’s Court weighed in on the matter, saying the “reputation (of anyone) would be in tatters, no matter how beautiful their dancing was, if they are found to be in contempt of court.” The top court stopped short of naming the state-run art troupe.

“Refusing to comply with a court verdict is already a violation of the law, without leaving much to say about attacking a legally binding ruling like a furious woman who has been scorned,” it said.