Is WeChat Snooping on Your Chats?

By Chen Mengfan, An Limin and Han Wei 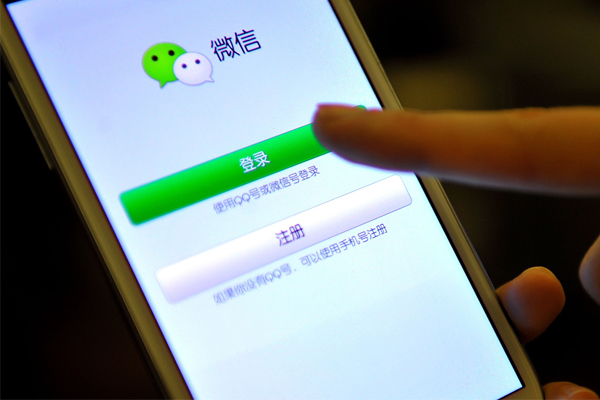 WeChat had 980 million active users by the end of September, who on average send 38 million personal messages through the service. Photo: Visual China

WeChat users continue to flame Tencent, despite the tech giant’s denial that it reads or stores conversations.

“All the messages go through a server. I don’t believe they don’t store them,” said a net user who identified as JerryCha.

The online uproar erupted after Li Shufu, the billionaire chairman of Zhejiang Geely Holding Group, was quoted by domestic media on Monday as saying that Tencent Chairman “Pony” Ma Huateng “must be watching our WeChat every day.”

Geely Vice President Yang Xueliang tried his hand at damage control, saying Li’s comments were intended to introduce the data-protection capacity of Geely’s new car model, “rather than targeting anyone.”

Meanwhile, Tencent issued a forceful denial that it reads or keeps WeChat conversations.

“WeChat does not store any user’s chat logs, which are only stored in users’ mobile phones, computers and other devices,” Tencent said in a statement on Tuesday, adding WeChat doesn’t use any content from user chat records for big-data analysis.

“The rumor that ‘we are watching your WeChat every day’ is pure misunderstanding… We have neither the authority nor reason to look at your WeChat,” Tencent said.

But that hasn’t calmed many of WeChat’s 980 million active users, who on average send 38 million personal messages through the service. Some users also expressed alarm that Tencent might be keeping other personal information. In addition to instant messaging, WeChat has spread out since starting in 2011 to allow users to buy goods, book a restaurant and, soon in Guangdong province, to be a digital alternative to national identification cards.

Privacy concerns have exploded in China as fintech and other companies have raced to collect valuable big data on their customers.

Adding to the worry is China’s Cybersecurity Law, which took effect in June and requires all internet companies to store internet logs and relevant data for at least six months to assist law enforcement.

An internet expert told Caixin that internet logs are different from chat histories as the former only track users’ usage histories – such as which applications and services they tapped – rather than contents of their messages. However, the expert said since all WeChat messages are processed through central servers, there is still possibility for WeChat to view the contents, which is how the operator can identify illegal activities on its platform.

Like many social media platforms, WeChat can filter and censor certain content distributed on its platform that violate China’s laws, such as gambling, financial fraud and pornography. Under the rules on management of internet content issued in September, internet companies will be held accountable if they don’t enforce content rules.

In a statement to Caixin, Tencent said it encrypts users’ messages during transmission to thwart information and privacy leaks of its users.

Tencent says in its privacy policy that it would never disclose users’ information to a third party without permission. It also says that it strictly follows national laws in assisting law enforcement and complies with international standards on information security.

Some users also say they are worried that increasingly customized ads shown on their WeChat apps mean Tencent is closely tracking their interests.

However, Tencent says in its privacy policy that data used for customized ads distributed don’t include users’ chat histories.

Liu Chunquan, a partner at Shanghai-based Duan & Duan Law Firm, said that considering the legal risks of privacy breaches, Tencent has no reason to retain users’ private conversation history. In addition, given how many users WeChat has, it would require massive storage and huge costs to keep chats, while having limited business value, Liu said.

Tencent is not the only social media platform to face a backlash over privacy concerns. Last month, France’s data-protection watchdog gave instant messenger WhatsApp and Facebook, its owner, one month to stop any data sharing.