Don’t Have Your ID? WeChat Will Do 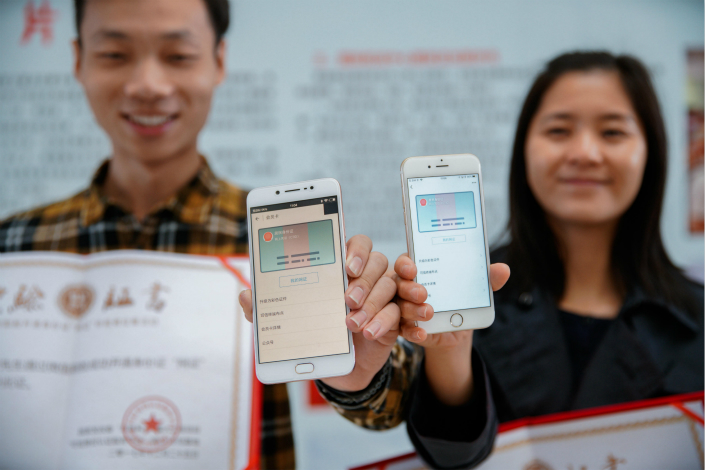 The southern city of Guangzhou issued China’s first digital identification card on Monday. Initially, citizens will be able to use the virtual ID for government services, such as registering a company with the commerce authority in Guangzhou. Photo: Visual China

First, WeChat rendered paper money all but obsolete in China, with its easy-to-use digital wallet accepted in nearly every corner of the country.

Now, citizens will be able to leave their identification (ID) cards at home as well.

Tencent’s widely used WeChat app has gotten the green light to help issue digital ID cards to citizens in the southern province of Guangdong, according to the Guangzhou Municipal Public Security Bureau.

To use the technology, people will register their ID and appearance at the local police station, and store a corresponding digital identification in the smartphone app.

Initially, citizens will be able to use the virtual ID for government services, such as registering a company with the commerce authority in Guangzhou. The utility will eventually expand to allow users to check in at hotels, buy train tickets and complete other transactions that normally require them to verify their real names.

The service will extend beyond Guangdong as soon as January 2018, the bureau said Monday.

This is a preliminary result of a project undertaken last year by China to improve the accuracy of identity confirmation using facial recognition.

The technology has proven to be more reliant than the human eye.

A police officer, surnamed Yan, told Caixin that as long as the skeletal structure of a person’s face remains unchanged, things like makeup, hairstyle changes and weight loss will not affect the accuracy of the facial recognition. Yan is from the First Research Institute of the Ministry of Public Security, which developed the technology with the Guangdong Provincial Public Security Department.

Humans make mistakes in roughly 15% of cases when matching a person’s appearance with an ID. By contrast, facial recognition errs in fewer than one out of a million cases, Yan said.

Even twins can be differentiated, he said, because the system has access to biographical data, and can then apply an algorithm to distinguish siblings.

“It’s different from the iPhone’s Face ID,” Yan said, because the Apple technology does not have access to such underlying biographical information.

“It will be very convenient as I’ll need to carry only a phone outside,” commented Shenzhen-based dentist Kong Dewang on Sina Weibo, a Twitter-like social media platform.

But others expressed concern over privacy and cybersecurity, since their identity will be stored on a potentially vulnerable smartphone app.

“I'm worried that the (personal) information might be leaked,” said Weibo user Silüsanqiu.

In a statement, the Guangzhou Municipal Public Security Bureau said that the new function uses a public security bureau system and that private data will not be sent over the internet — a claim that could not be independently verified.

Yan argued that digital identification could actually better protect people’s privacy, because they don’t have to submit a copy of their actual ID or ID number, which could be visible to third parties. In comparison, the digital card contains only unidentifiable code.