By Wang Jing and Mo Yelin 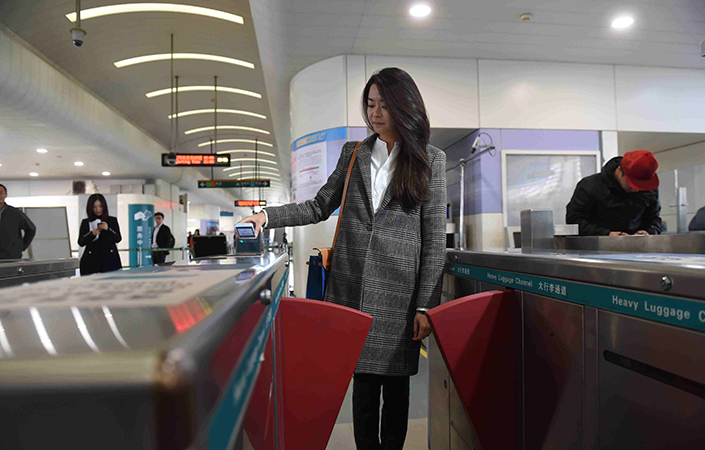 Tencent and Alibaba have been racing to get their rival mobile payment platforms installed in public transportation systems across China, from subways to public buses. Above, a passenger on the Shanghai maglev line uses her mobile phone to pay for her ride on Oct. 30. Photo: IC

Guangzhou Metro passengers can now pay for their rides with the WeChat messaging app, as Tencent Holdings Ltd. competes with its rival Alibaba Group Holding Ltd. to get on track in the public transportation sector.

Since last Thursday, commuters in the southern metropolis have been able to take the subway after allowing the turnstile to scan a QR code generated by a WeChat in-app mini program. The turnstiles can scan the codes within 0.3 seconds, Tencent said.

The system also supports offline payments, where passengers without an internet connection can travel first and pay later when they are next online.

“We hope to connect the public transportation sector with the mobile payment industry in China, as a way to provide faster and more convenient services for daily commuters,” said Zheng Haojian, a vice president at Tencent.

Tencent’s move, which will make Guangzhou the first Chinese city to accept QR code payments at all of its subways stations, comes after passengers on Shanghai’s maglev line were able to start paying with Alibaba’s Alipay payment service last month.

As on the Guangzhou Metro, travelers on the Shanghai maglev line can use Alipay to pay for their tickets by scanning a QR code.

WeChat has exploded since its launch in 2011, and now boasts more than 700 million users, equal to more than half of China’s population. The service began as an instant messaging platform for cellphones, but in recent years it has rapidly added other features, among them those that allow consumers to pay for goods in stores, and to book train and plane tickets.

The public transportation sector has recently become the latest battleground for major mobile payment players like Tencent and Alibaba, who both hope to make an early entrance and secure a better position.

Before making forays into subways, Tencent launched mobile payments services on public buses in 11 Chinese cities, including Guangzhou, Qingdao and Hefei, while Alipay has launched similar public bus payment services in as many as 18 cities, including smaller ones like Jiaxing, Zhejiang province.

It is unclear how successful Tencent will be in the Guangzhou Metro, as unlike the city’s existing travel card system, it does not offer discounts to frequent riders.

It also faces competition from payment service provider UnionPay, which has also joined with Guangzhou Metro to provide mobile payment services for passengers.