By Li Liuqian and Yang Ge 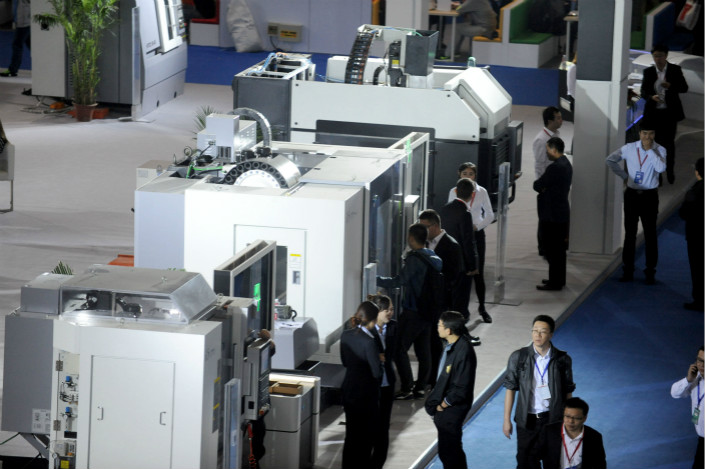 Shenyang Machine, one of many unprofitable state-run manufacturers in China, has spun off many of its least viable units. It is now focusing on its most promising core line of 5i smart machines (pictured). Photo: Visual China

Money-losing Shenyang Machine Tool Co. Ltd. has signed a major strategic tie-up with the financial leasing arm of China Development Bank, as part of a drive to reinvent itself after a major company overhaul.

Shenyang Machine is one of many big money-losing state-run manufacturers across China that are trying to become more commercial through reorganizations, usually with help from the central and local governments. The company has spun off many of its least viable units and is now focusing on its most promising core line of 5i smart machines.

To boost its sales, Shenyang Machine is trying to get into the financial leasing business, which typically sees customers lease their equipment rather than buy it outright. But such a strategy carries big capital costs because the supplier must pay for equipment up front and then wait over long periods to recoup its investment through rental income.

To lessen that burden, Shenyang Machine said it has signed a strategic cooperation agreement with the financial leasing arm of China Development Bank, a policy bank that typically lends for projects in line with Beijing’s objectives. The tie-up will be worth about 5 billion yuan ($758 million) in business over the next three years, and will see the pair work together on financial leasing deals for users of Shenyang Machine’s equipment, according to a statement to the Shenzhen stock exchange this week.

Shenyang Machine entered equipment leasing in 2015, but that part of the business has been slow to take off. In the first half of last year, it brought in 135 million yuan, or about 6.6% of Shenyang Machine’s total revenue. In 2016, the company brought in 100 million yuan from its top 30 equipment leasing customers, even though that equipment had a value of nearly 800 million yuan. The business model’s big capital requirements have been a major bottleneck for growth.

Shenyang Machine’s shares were up 1.8% in late Thursday trade, and have rallied 8% this week.

In May, the company announced it would receive a major support package from China Construction Bank, one of the nation’s top-four lenders, and the Shenyang branch of the State-Owned Assets Supervision and Administration Commission, the agency that oversees big state-run companies and is one of Shenyang Machine’s major stakeholders.

The package included a 10 billion yuan rescue, to be used mostly for reduction of the company’s debt and a broader reorganization of its business.