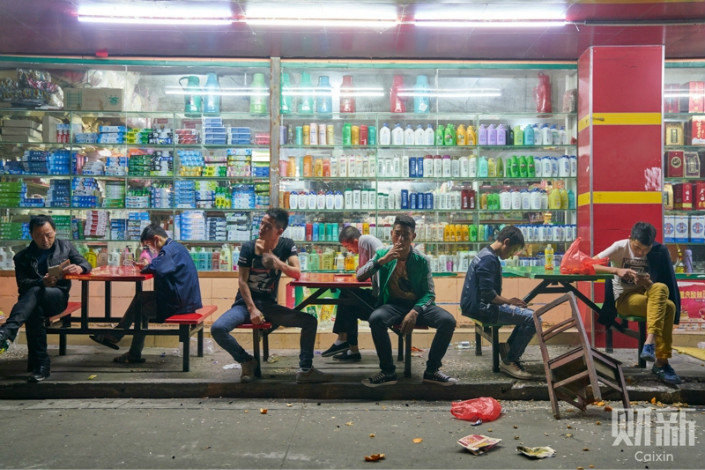 A group of Yi factory workers sit in front of a grocery store near their dorm in Dongguan, a manufacturing hub in Guangdong province. Since the early 1990’s, thousands of Yi workers have left their isolated mountain villages to work in big cities. But language difficulties and their adherence to their own customs have led to discrimination, with many only being employed as temporary workers without health insurance or other benefits. Photo: Liang Yingfei/ Caixin

When Shazigu, from the Yi ethnic minority, failed his high-school entrance exam, he decided to follow in the footsteps of dozens of other teenagers from his poverty-stricken village and find work in the southern manufacturing hub of Dongguan.

The 18-year-old is among the army of teenage workers that trickle out of mountainous villages in the Liangshan Yi Autonomous Prefecture, which straddles the southern border of Sichuan province in southwest China. These teens power assembly lines during the Lunar New Year, when workers of the country’s majority Han ethnicity return home for weeks on end. Yi people hold their New Year celebrations months earlier.

But many of these young people, unaware of their rights, are only hired as temporary workers with no health insurance or social security benefits. Cultural prejudices against the minority, portrayed in the mainstream media as “uncivilized,” “untidy” and “bad tempered,” have also fueled their marginalization.

"People think Yi people are rowdy and pugnacious. They just see 3% of Yi and assume all are bad,” Shayinuo, a labor contractor at Longfu Staffing Co. Ltd., said. “Yi people have a strong sense of community, and it’s our tradition to stand up for each other. But this strong bond is easily misunderstood by others, who think Yi workers are troublemakers and like to fight in groups.”

Many migrate in groups and prefer to work on the same assembly line so that they can look out for each other. “For many, it’s their first time in a big city, and agents have the responsibility to educate them,” said Shayinuo.

However some agents have chosen to exploit, rather than educate.

It was previously reported that Yi youngsters below the legal working age of 16 were being lured to factories by contractors who offered them fake identity documents. But after the Southern Metropolis Daily, a state-run newspaper, reported that nearly a 1,000 school-age workers from Liangshan were employed in China’s prime export manufacturing zones in Guangdong province in 2008, authorities have cracked down on the trafficking of child workers.

Although many Yi teenagers speak Mandarin, their heavy accents and inability to understand local dialects used in their places of work have made it harder for them to integrate.

“Their accents are different from ours, so it’s not always easy to communicate,” said 18-year-old A-long, who preferred to use a pseudonym.

A-long said he dropped out of school because he was constantly getting into fights. “Then I was sitting at home, surfing the internet all day. I decided to look for work, because I wanted to change my life,” he said.

But within the first hour of working in a toy factory in Dongguan, A-long decided he wanted to move on.

“Five of us came to work at the factory together, but within an hour the other four were assigned to another workshop in the same factory. I wanted to go with them because I was not familiar with this place,” he said.

Three months later, A-long was pulled up for texting his girlfriend while at work and was fired for arguing with the supervisor.

A-long then decided to come to Beijing, where Caixin met him again in April. “I only saved about 400 yuan ($61.5) in total during the three months I was employed in the factory,” he said. He said he spent most of his wages on late-night barbeque and beer sessions with his friends.

A-long has found work on a construction site in Daxing, a suburb in the south of Beijing, and his goal is to collect enough money to buy a train ticket home.

“I regret coming here,” he said. “My hands are aching from binding reinforcement bars. And we can’t adjust to the food or the living conditions here,” said the teenager, who lives in a cramped dorm with several friends.

His friend Shazigu went to the far western Xinjiang autonomous region to pick cotton instead of coming to Beijing. When Caixin last contacted him in November, he said he had saved about 10,000 yuan and was getting ready to go back home.