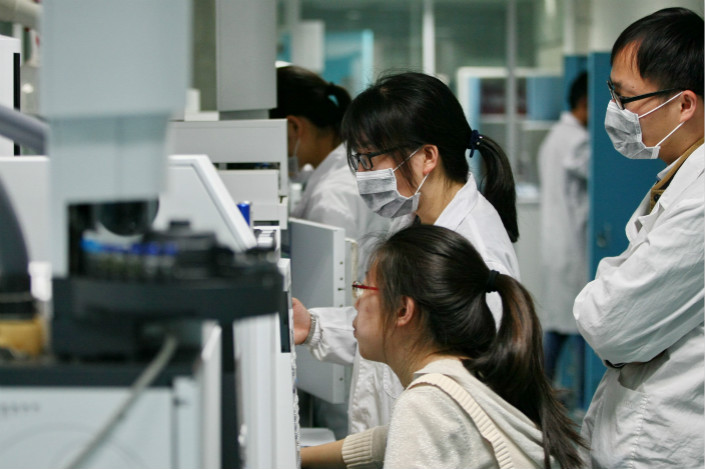 Jiangsu Hengrui Medicine Co. Ltd. warned in itsThursday statement that the skin disease drug it has licensed to Arcutis Pharmaceuticals Inc. is still in development, which takes a long time and isn’t always successful. Photo: IC

A Chinese drug-maker has licensed its experimental skin disease drug to a U.S. peer, in a relatively rare case of a China-developed drug challenging Western rivals, in this case a similar product from Pfizer Inc.

Jiangsu Hengrui Medicine Co. Ltd. will receive up to $223 million plus commissions from its new licensee, Arcutis Pharmaceuticals Inc., for a Janus kinase inhibitor (JAK inhibitor) used to treat skin diseases, the Chinese company said in a filing to the Shanghai Stock Exchange on Thursday.

The agreement authorizes Arcutis to market the drug in the U.S., European Union and Japan.

JAK inhibitor functions by inhibiting the activity of certain enzymes in order to treat cancer and inflammatory diseases such as rheumatoid arthritis and psoriasis.

Hengrui’s inhibitor is still in the clinical trial stage, and Arcutis will be responsible for both developing and selling the product in foreign markets after conducting its own clinical trials.

“(After the product) is launched, it will provide skin disease patients with better treatments and improve the company’s innovative image and performance overseas,” Hengrui said in the filing.

Hengrui and Arcutis will be playing catch-up to American pharmaceutical giant Pfizer, which got U.S. Food and Drug Administration approval for its own similar drug to treat rheumatoid arthritis in 2012. The EU and Japan approved the product in following years, also for the treatment of rheumatoid arthritis.

In the latest deal, Hengrui didn’t authorize Arcutis to study the inhibitor’s efficacy in rheumatoid arthritis, but focused on skin diseases instead.

Pfizer launched its inhibitor in China last year for the treatment of rheumatoid arthritis. Over two dozen other drug producers are developing similar JAK inhibitors in China as well, heating up the domestic market.

Hengrui warned in the Thursday statement that the drug is still in development, which takes a long time and isn’t always successful.