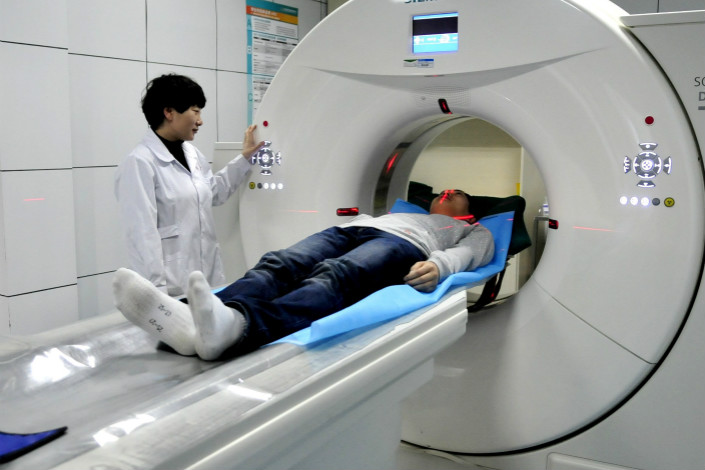 CAR T cell therapy is a type of adoptive cell transfer (ACT) treatment considered to be the “fifth pillar” of cancer treatment, along with drugs, surgery, chemotherapy and radiation. ACT is a form of immunotherapy that collects and uses patients’ own immune cells to treat their cancer. Photo: Visual China

A joint venture between Fosun and Kite Pharma Inc., the U.S. developer of lymphoma treatment Yescarta, has launched an institute in Shanghai to localize the technology and eventually introduce it to the China market, Fosun said in a statement Tuesday.

When exactly the drug will be launched in China is not yet clear, a Fosun spokesperson told Caixin.

Yescarta is the brand name of a CAR T cell therapy, a type of adoptive cell transfer (ACT) treatment that is considered the “fifth pillar” of cancer treatment, along with drugs, surgery, chemotherapy and radiation. ACT is a form of immunotherapy that collects and uses patients’ own immune cells to treat their cancer.

ACT technology is still at an early stage of development. The U.S. Food and Drug Administration in August approved Novartis’ CAR T cell therapy Kymriah, which is used to treat children with acute lymphoblastic leukemia. Yescarta, for adults with advanced lymphomas, was approved by the U.S. regulator two months later.

But the U.S. National Cancer Institute said that “in many respects, it’s still early days for CAR T cells and other forms of ACT, including questions about whether they will ever be effective against solid tumors like breast and colorectal cancer.”

CAR T cell therapy is not available in China, with the exception of a pilot health care zone in Hainan province that has tentatively launched some drugs and medical products approved by the FDA.

China is a leader in CAR T cell therapy, in terms of number of studies and their quality, according to a September report by CEC Capital. Until the China Food and Drug Administration has gained more experience in regulating the technology, Chinese enterprises may turn to the U.S. as a place to conduct clinical trials and launch their products, CEC Capital said.