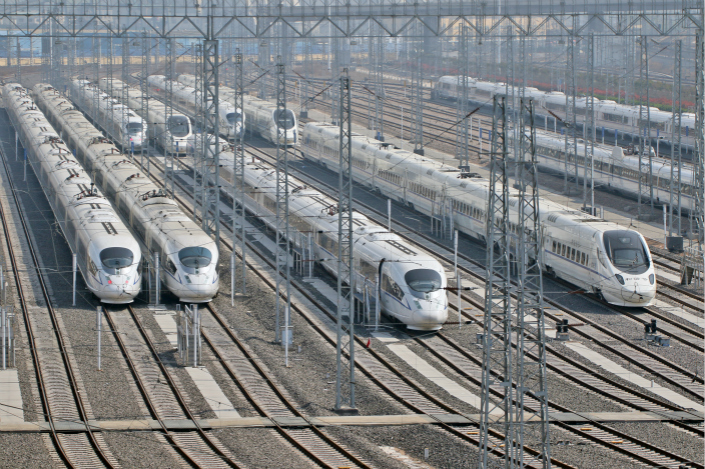 The years-long investment frenzy in China’s railway sector means that China Railway Corp. has also taken on a lot of debt. After the company was spun off from the now-defunct Ministry of Railways in 2013, its debt grew from 2.66 trillion yuan ($409.2 billion) to 4.72 trillion yuan as of the first quarter of 2017. Photo: IC

China’s state-owned rail operator has formed an alliance with the Shenzhen Stock Exchange in a move that could see it raise money from private investors to ease its debt.

China Railway Corp. (CRC) has signed a “strategic” agreement with the Shenzhen Stock Exchange, in which the latter will help CRC to carry out plans including “debt-to-equity swaps, asset securitization and mixed-ownership reform,” according to Lu Dongfu, chief manager of CRC.

Lu held a meeting with Wu Lijun, president of the Shenzhen Stock Exchange, on Tuesday. It is not clear which of CRC’s subsidiaries will eventually be listed on the Shenzhen stock exchange, or when these plans will be carried out.

The move came weeks after CRC published a long-delayed policy document in which it said it would keep promoting reforms and the reorganization of the railway system to set up efficient corporate structures and widen access to private investors.

According to the development plan, private investors will be encouraged to take part in mixed-ownership reform. Also, it will encourage railway assets with good capital flow and business operations to list on stock exchanges.

China’s railway sector has developed rapidly over the last few years, helping the country build the world’s largest rail network, which had 127,000 kilometers (78,900 miles) of track at the end of 2017, according to CRC. High-speed rail made up 20% of the network.

However, the years-long investment frenzy means that CRC has also taken on a lot of debt. After the company was spun off from the now-defunct Ministry of Railways in 2013, its debt grew from 2.66 trillion yuan ($409.2 billion) to 4.72 trillion yuan as of the first quarter of 2017.

In what appears to be the latest sign of the railway operator moving to rein in the debt problem, CRC set an investment target this month that is 8.5% less than the 800 billion yuan benchmark it had used since 2014.

Additionally, in November Caixin learned from various sources that Beijing has tightened approval of local transportation projects in 2017 to curb risks from the debt-driven infrastructure boom. Cities in northern China’s Inner Mongolia region had scrapped subway and expressway construction plans worth billions of dollars due to financial concerns.