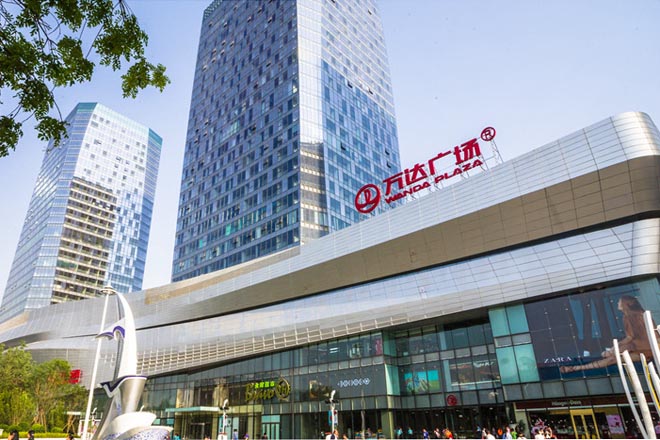 Wanda didn’t disclose how many employees in the cloud-computing unit will be laid off, but executives said “only a few people will stay,” an employee told Caixin. Photo: Visual China

Wanda will cut the workforce at the cloud-computing department under Wanda Internet Technology Group, the sources close to the matter said. Wanda cut some jobs in Wanda Internet last year, leading to speculation that the conglomerate was retreating from the segment amid years of slow growth and mounting capital pressure.

At an internal meeting on Monday, executives blamed the downsizing on problems in its partnership with IBM forged last March, sources said.

Wanda will halt its efforts with IBM to sell cloud-computing services and temporarily suspend part of related development and research works, a Wanda employee who attended the meeting told Caixin.

The layoffs come as Wanda has backed off years of aggressive overseas buying, reflecting Beijing’s increasing scrutiny of private companies’ debt-driven investment due to concerns about capital flight and mounting corporate debts.

The layoffs may signal trouble for IBM’s effort to compete with Microsoft and Amazon in China’s burgeoning cloud-services market, industry analysts said. But sources close to IBM said it has also tied up with other domestic partners, including data center provider Inspur, to compete in the Chinese market.

Wanda didn’t disclose exactly how many employees will be laid off, but executives said at the meeting that most people at the cloud-computing department – which reportedly has several hundreds of employees – will be affected and “only a few people will stay,” said the employee.

A Wanda employee said company executives didn’t make clear whether the partnership with IBM has been terminated. Instead, the employee said, “it is hard to push forward at this moment.” Another employee said it will be difficult for Wanda to resume the cloud business after the latest shakeup.

Big dreams to be a big player

Wanda Internet, set up in 2016 to focus on e-commerce, digital payments, internet finance and cloud computing, reportedly started forcing people to quit in June 2017 and accelerated the downsizing process by year-end. The layoffs were initially focused on the company’s e-commerce and part of the internet-finance departments late last year, according to Wanda employees interviewed by Caixin.

The cloud department within Wanda Internet, was set up last March in partnership with IBM, in an aim to bring the U.S. tech giant’s public cloud services to China. Counting on IBM’s know-how, Wanda executives said at that time the company aimed to become one of China’s biggest public cloud providers in five years, with investments estimated at “billions of yuan.”

Under the partnership, IBM was to provide technology and training for data centers built by Wanda, while Wanda was to sell the services and ensure that the services complied with Chinese regulations.

In June 2017, Liu Kehong, head of Wanda’s cloud department, said the pair expected to start pilot services at the end of 2017 and officially launch the public cloud services in Chengdu and Shanghai in 2018.

But the plan was delayed. In June, the China Banking Regulatory Commission ordered commercial banks to study bad loan risks related to major dealmakers, including Wanda, HNA Group and Fosun International. Banks have since tightened credit control on those companies, sources close to the matter said.

Under pressure, Wanda pulled back from its years of aggressive expansion and switched the focus back to its core commercial property business. In July, Wanda sold 77 hotels and 13 tourist resorts for a total of 63 billion yuan.

A person close to Wanda Internet told Caixin that since the second half 2017, Wanda has lost its momentum in developing the data centers with IBM and delayed purchase of a lot of equipment, upsetting IBM.

Wanda decided to further scale back from the internet business in late 2017 after it failed to turn a profit on its e-commerce business for the fourth year, a source close to Wanda said.

The company also sought to reshuffle the cloud computing business and held negotiations with IBM in the hopes of revising the partnership and getting more capital injection from IBM. But the two parties failed to reach an agreement, sources said.

Wanda’s move to slash the sales team of the cloud department late last year was taken “without discussing with IBM beforehand,” said a former Wanda employee who was laid off.

Wanda told media at the time that the layoffs were only a partial adjustment of the partnership with IBM and the companies would continue pushing forward the launch of the public cloud services. But several sources close to the company told Caixin that Wanda has decided to withdraw from the cloud business.

IBM declined to comment on the matter but said the company remained determined to put down roots in China’s cloud-computing market.

A stalled partnership with Wanda is not helpful to IBM’s push to be a player in China. Under Chinese rules, foreign cloud-service providers must partner with licensed domestic companies to operate in China.

IBM spent over one-year in negotiations to settle the partnership with Wanda, counting on the Chinese conglomerate’s financial strength and ambition in cloud business.

IBM’s fate in China may in the end turn on its tie-ups with other domestic partners.

This story has been updated to remove a reference that IBM’s pairings with other companies were due to requirements under Chinese law.