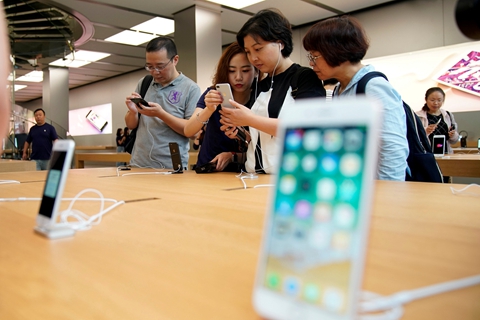 Apple Inc. announced Wednesday that it will hand over the operations of its iCloud data services for Chinese mainland users to a Guizhou-based company to comply China’s cloud-computing rules, starting next month.

The U.S. tech giant said as of Feb. 28 all iCloud data services for users with Chinese mainland accounts will be managed by Guizhou-Cloud Big Data (GCBD) and all of their data will be stored domestically in China.

“Use of these services and all the data stored with iCloud — including photos, videos, documents, and backups — will be subject to the Terms and Conditions of iCloud operated by GCBD,” Apple said in a statement.

The move reflected tightening Chinese rules on cloud services. A sweeping Cybersecurity Law, which took effect in June 2017, requires tech firms to store all of the data they generate from China inside the country’s borders.

Another industry policy issued by the Ministry of Industry and Information Technology in January 2017 stipulates cloud services in China must be operated by Chinese companies and foreign firms must partner with qualified domestic players to launch such services.

Global cloud-service giants including Microsoft, Amazon and IBM have also moved to comply with the new rules for their cloud services in China. Late last year, Amazon Inc.’s Amazon Web Services sold sell assets of as much as 2 billion yuan in China to its partner Beijing Sinnet Technology Co. to help Sinnet Technology obtain a cloud services certificate needed to continue operating.

Apple said Wednesday that the transfer will “improve the speed and reliability of the iCloud services products while also complying with newly passed regulations.”

Users affected by the change can either keep using iCloud or deactivate it. Users with overseas accounts will not be affected, Apple said.

Apple said it will communicate with its users over the course of the next seven weeks to make sure customers are well informed of the coming changes. Apple “has strong data-privacy and security protections in place and no backdoors will be created into any of our systems,” it said.

China is now Apple’s third largest market in sales after U.S. and Europe. In the last quarter of 2017, Apple’s total sales in Greater China, including the mainland, Hong Kong, Singapore and Taiwan, grew by 12% year-on-year to $9.8 billion and rose 22% from the previous quarter.

But China sales have fallen from a peak of $18.4 billion in the first quarter of 2016. China became Apple’s second-largest market in the second quarter of 2015, when the country contributed $16.8 billion in revenue to the company. China remained in that position until the third quarter of 2016, when Apple reported that its China revenue fell to $8.8 billion.