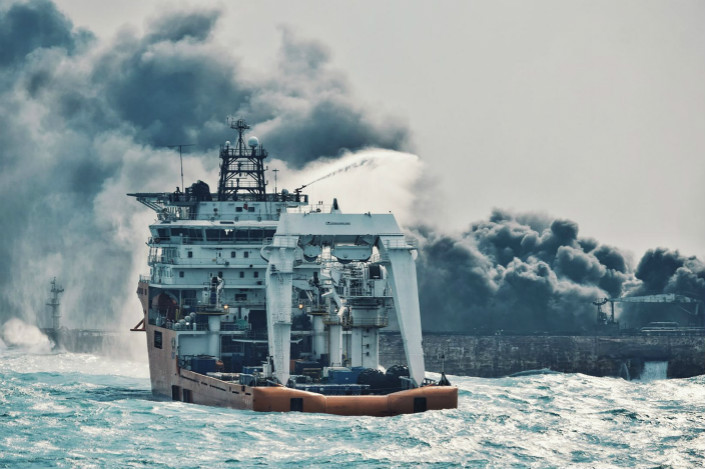 Chinese officials said that the Panamanian-flagged oil tanker Sanchi was already on fire when it collided with the Hong Kong-flagged cargo ship CF Crystal in the East China Sea on Saturday. Above, the Chinese ship Shen Qian Hao (foreground) sprays foam on the Sanchi on Wednesday before the arrival of firefighting crews that night. Photo: Visual China

Rescue crews were forced to retreat from a burning oil tanker in the East China Sea on Wednesday after an explosion on the ship — still ablaze four days after colliding with a cargo ship.

The Panama-flagged tanker, named Sanchi, was en route from Iran to South Korea when it collided with the Hong Kong-flagged CF Crystal about 160 nautical miles (184 miles) east of the Yangtze River estuary on Saturday night, China’s Ministry of Transport said.

Firefighting crews on three Chinese ships managed to reach the accident site at about 11 p.m. Wednesday after being delayed by bad weather. But an explosion at about 1:30 a.m. Thursday cut short salvage operations and forced rescue vessels to retreat because of safety concerns, the ministry said.

Thirty Iranians and two Bangladeshis were on board the tanker. Only one body has been found so far, the ministry said.

All 21 crew members who were on board the cargo ship were rescued, and the vessel has docked on Zhoushan Island in Zhejiang province.

The center, affiliated with the Transport Ministry, also said Sanchi was already on fire at the time of collision, citing eyewitness accounts from the cargo ship’s crew members. The fire spread to CF Crystal during the collision, and the cargo ship — its power still on — circled the crash site and drifted after its crew fled.

The blaze on the cargo ship was not extinguished until Sunday morning when three crew members were able to return to switch off the power and put out the fire, the center said.

An investigation into the collision is still ongoing, the ministry said.

Sanchi was carrying 136,000 tons of ultralight oil, or condensate, and no large oil spill was spotted, according to ministry. Authorities stopped short of giving any details about the extent of a possible oil spill.

Zhao Ruxiang, a senior engineer at Yantai Maritime Bureau in the eastern province of Shandong, earlier told Caixin that condensate can burn off or evaporate quickly, leaving little residue compared with crude oil.