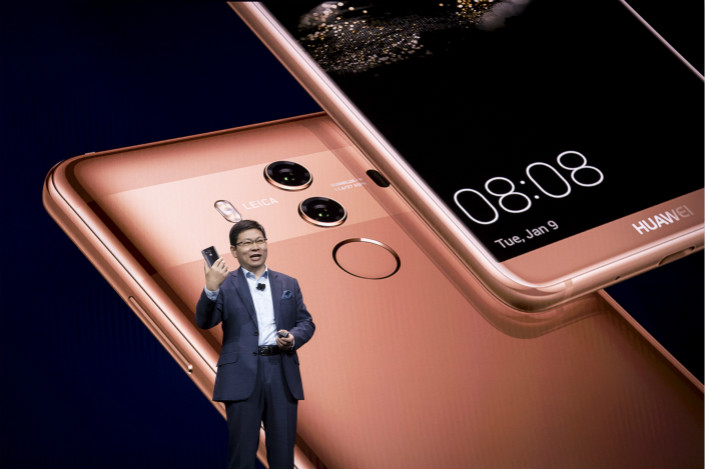 A judge in Shenzhen said Thursday that Samsung Electronics violated one of Huawei Technologies Co. Ltd.’s patents for wireless communication, and ordered Samsung to immediately stop selling all products containing the technology. Above, Huawei CEO Richard Yu, holds a Mate 10 Pro smartphone during the company's keynote event at the 2018 Consumer Electronics Show in Las Vegas on Tuesday. Photo: Visual China

Huawei’s filing of a lawsuit at home also reflects China’s status as the world’s largest smartphone market, as well as Beijing’s efforts to nurture development of new technologies by building a strong intellectual property protection system.

A judge in Huawei’s hometown of Shenzhen on Thursday found that Samsung Electronics violated one of Huawei’s patents for wireless communication, and ordered the South Korean company to immediately stop selling all products containing the technology, according to a video of the trial posted online. It told Samsung to pay a small court fee, but did not order any other damages.

Samsung said it would carefully study the decision and make an appropriate response in accordance with the relevant laws.

Huawei sued Samsung in both Shenzhen and California in 2016 for infringing on several patents. But the Shenzhen court determined that only one of those had been violated, and dismissed claims involving the others. The California case has yet to be decided.

Huawei is just one of a growing number of major companies turning to the Chinese court system to settle its intellectual property claims, as Beijing tries to create a better environment for local innovation in its move away from low-end manufacturing. U.S. smartphone giant Apple Inc. and leading smartphone chip maker Qualcomm Inc. both sued each other in China last year over intellectual property theft, as part of a series of lawsuits filed globally.

The decision to file cases in China is also a nod to the country’s status as the world’s biggest smartphone market, accounting for nearly a third of global sales based on units shipped. Huawei is the largest player in its home market, and the third-largest smartphone seller globally behind Samsung and Apple, according to data tracking firm IDC.

This story has been updated to add comment from Samsung.