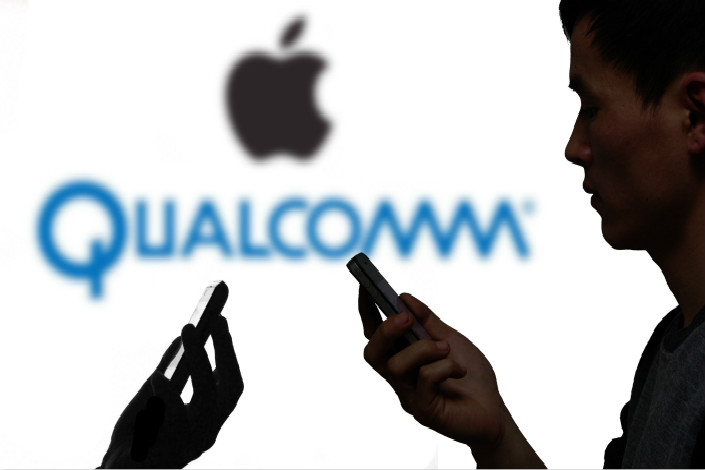 The legal wrangling between Apple Inc. and Qualcomm Inc. began in January, when Apple sued Qualcomm in a U.S. federal court in California, claiming the chipmaker was abusing its market dominance. Photo: Visual China

Apple Inc. said chip supplier Qualcomm Inc.’s lawsuit aiming to ban the sale and manufacture of iPhones in China was “meritless” and “will fail.”

Qualcomm’s complaints — recently filed in the Beijing Intellectual Property Court and accusing Apple of infringement of three Qualcomm patents — are the latest development in a legal battle between the two that began in January.

The three nonstandard essential patents involved in the case include power savings and Force Touch technologies that are part of current iPhone models, a Qualcomm spokesperson said.

“Apple is using technologies invented by Qualcomm without paying for them,” the spokesperson said.

Apple told Caixin that “these patents have never been discussed and in fact were only granted in the last few months.”

China is essential to Apple: It is the company’s single largest overseas market, with net sales from Greater China accounting for 22.5% of the company’s sales in the last fiscal year.

At the same time, Apple dropped to fifth from fourth in the China smartphone market, as it faces fierce competition from domestic rivals Huawei Technologies, Oppo Electronics Corp., Vivo Smartphone and Xiaomi Inc., according to research firm Counterpoint.

The legal back-and-forth between the two began in January with Apple’s suing the chipmaker in the U.S. District Court for the Southern District of California, accusing Qualcomm of abusing its market dominance. Apple filed a similar suit in China a week later and other antitrust litigation worldwide.

Qualcomm countersued Apple later in April in the same federal court, saying Apple had interfered with its business relationships with other tablet and smartphone manufacturers. In response, Apple stopped paying licensing revenues to Qualcomm.

A person familiar with Apple told Caixin that it will take about three years for the two to settle the cases.