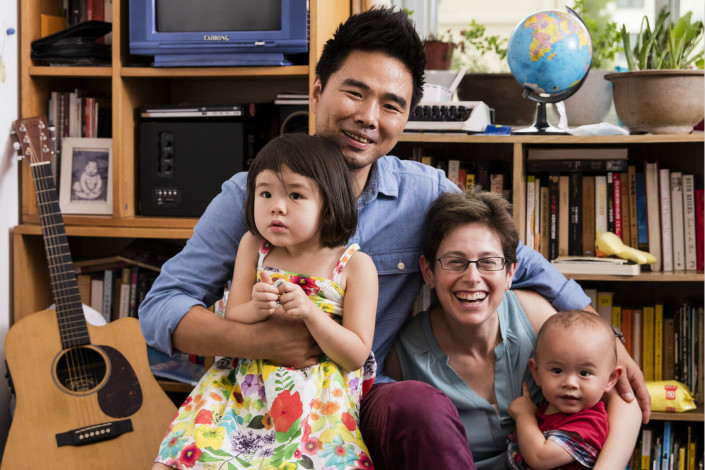 Liu Jian decided he was destined to become a rocker when he first listened to Chinese rock-pioneer Cui Jian. That was when Liu was 16, and it led him to a life as a wandering singer until he managed to save enough money for his first album nearly a decade later.

Liu’s journey also included a six-year stint in the military. His musical talents paved the way for this high-school dropout to enter a prestigious military art academy in Beijing, which counts Nobel laureate Mo Yan among its alumni. But the dream to become a rocker proved irresistible, so he again dropped out and went to Shanghai.

“I’ve always felt like I wanted to take my guitar and walk into the horizon,” said Liu, who is now an established singer, songwriter and music-entrepreneur who is trying to revive the long-ignored genre of children’s music in China.

While making a living by performing on the subway and singing in a pub near Shanghai’s Fudan University, Liu penned two military-themed novels — “Rock Soldier,” in 2004, and “Retired Soldier,” in 2008 — and the rights to both books were purchased by TV producers.

“That was my big break. I plowed back the money from the rights sales into my first album, ‘Memories of a Wandering Singer,’” he said. Liu has recently turned his attention to a new genre of music, known as children’s independent music, or “kindie rock.”

“One day I was looking for music for my children on (search engine) Baidu, and I realized most of the songs were the same ones I’d heard as a child,” he said.

That’s when he by chance discovered the Grammy- and Emmy-winning Lucky Diaz and the Family Jam Band, from the U.S. “This was high-quality music, with great lyrics that both parents and children could enjoy together. And I wanted to bring bands like that to China,” he said.

This was the start of a two-year process to bring China’s first international music festival for children 2 to 15 years old. The result was that Liu co-founded the Hand in Hand International Children’s Festival (in Mandarin, “Shou La Shou Guoji Ertong Yinyue Jie”) together with his journalist wife, Rebecca Kanthor.

“A children’s festival is quite different from one for adults. There are strict noise and lighting standards you must follow to make sure it’s not uncomfortable for small children, and you need to be careful about security,” Liu said.

This year, they plan to take the festival to seven cities, including Beijing and Tianjin.

Caixin spoke to Liu about trends in China’s children’s music scene and the challenges for organizing festivals for kids.

Caixin: What is kids’ music?

Liu Jian: There are many kinds of music for children. Every country, including China, has traditional folk songs that children sing. But throughout the world, and especially in North America and Europe, a new generation of kids’ music has been developing in the last decade, one that is meant for kids, but that adults enjoy too. It’s been dubbed “kindie rock.” The bands are made up of adults but they sing about topics that children love. There’s no limit to kids’ music: It can be rock, hip hop, jazz, ska (a precursor to reggae) or even heavy metal.

What age groups do you target?

Our music festival targets families. There are 15-year-olds who come to our shows and rock out and also young parents carrying their babies. We’ve seen many kids coming with their parents and even grandparents. We pay a lot of attention to safety, lights and sounds, so it’s suitable even for infants and expecting moms.

Is it usually both entertaining and educational?

We spent more than two years looking for the coolest and most creative bands for kids that make music that parents can enjoy too. The bands we’ve chosen to bring to China have excellent musical quality, lyrics that encourage universal values, and live performances that kids find exciting. It’s not “educational” in the sense of learning something concrete, but the values the songs share stay with kids and families long after the show is over.

In China, there is no kids’ music scene. The songs available for kids are mostly old songs. Some are the same folk songs from when I was a child. No one here is making “kindie rock” music like they are in North America and Europe. … Parents who were born in the ’80s and ’90s grew up going to music festivals and live shows. They want to share great music with their kids. Over the next five years, we plan to bring the best bands for kids from 10 countries to 100 cities in China.

From a technical standpoint, a children’s music festival is very different from a typical music festival. Hand in Hand is the first real music festival for the whole family in China. We think kids deserve the highest quality experience at a live show. We cater to our smallest audience members so everything is comfortable and convenient for families. We have strict guidelines for our sound levels and lighting cues and safety.

The audience is always really excited at our shows, and everyone is up and dancing to the music. There are lots of opportunities for kids to get up on stage and interact with the bands as well. It’s a bit wild! It’s so much fun to see kids and their parents really get into the music together.

How did you and your wife get into this? What’s your story?

I’m a musician, and my wife is a journalist. We met through music and wanted to share great music with our kids. When I searched for Chinese children’s music to share with them, I realized the music options for kids here were really lacking. We heard a kids’ music CD from the U.S., and it was so good I decided right then and there to bring the band to China for a show, if only for our own kids to enjoy. We searched the world over for the best music to share with kids and were astounded by the amazing music they are making. Before we had kids, we used to go to music festivals all the time, but we found they weren’t really suitable for children, so we decided to make a music festival meant for the whole family to enjoy together.

Are kids’ music bands also required to submit their content for prior approval by government authorities, like all bands that want to perform in China?

Kids’ music bands are treated just the same as any other band coming to China. We must submit their lyrics and get approval for all the bands and performances. We’ve never had a problem. We do a lot of vetting ourselves beforehand and only select bands who we think will fit the China market.