In Depth: Qbao Founder in the Clink After Rags-to-Riches Promises 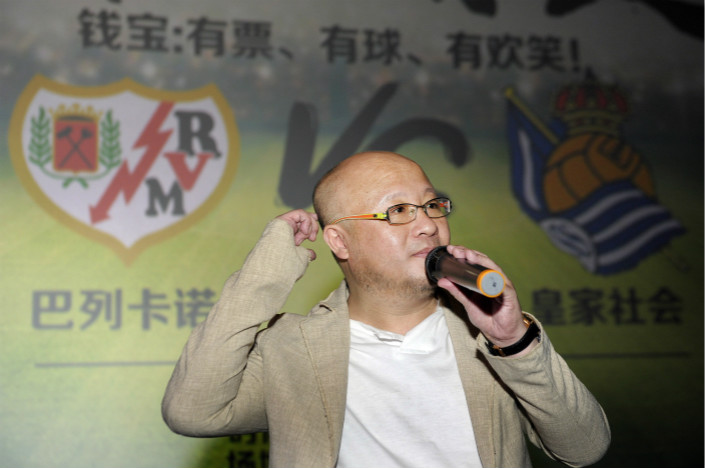 Qbao founder Zhang Xiaolei turned himself in to the police over allegations he scammed investors. Photo: Visual China

When the founder of Qbao turned himself over to police in Nanjing shortly before the New Year’s holiday, it sent shockwaves through China and spotlighted illegal investment schemes on the internet where rags-to-riches promises have outpaced the ability of authorities to shut them down.

Zhang Xiaolei, who dangled tales of returns of up to 80% to potential investors, launched Qbao.com in 2012. A source close to authorities told Caixin that he is accused of illegally raising 70 billion yuan ($11 billion), in what, if proven true, would be the largest online investment fraud in China’s history.

“Qbao investors put all their trust in Zhang. It is like a cult,” said a former executive of Qbao.

Qbao – whose full name, Qianbao, means “money treasure” – isn’t the only internet wealth-management and marketing company to come under scrutiny, as Chinese regulators step up their crackdown on violations in China’s scandal-plagued internet finance industry. Last year, a leading online peer-to-peer lending service Ezubao was accused for swindling over 900,000 investors of more than 50 billion yuan in less than two years, using fake companies posing as borrowers.

Zhang surrendered to police on Dec. 26 in Nanjing, the capital city of eastern China’s Jingsu province. Qbao.com is now shut down, and police believe millions of investors across China may have fallen prey to the alleged Ponzi-style scam.

Now police, regulators and investors are left to answer: How did Zhang amass such a following?

Anxiety shook the city of 8 million people of Nanjing, where Qbao was started and most of its business is based.

“Almost every person in Nanjing knows someone who has invested in Qbao,” a source close to the company said.

Qbao’s business model was simple – and lucrative. It offered as high as 80% of annualized investment return to investors after they placed required amounts of deposit with the company and took part in product promotional activities, such as watching advertisements, sharing information about products on social media or simply signing into their account every day for a required period. The higher deposits investors paid, the more return they were promised.

For instance, a depositor who put 1 million yuan with Qbao was offered 1,000 yuan in bonus each day when he or she signed in on Qbao’s app. The lure of high returns attracted around 2 million users to sign onto Qbao every day in late 2017, several former company employees told Caixin.

In 2017, Qbao claimed it had 200 million registered users. A former company executive said to Caixin that in early 2016, the site had handled daily transactions of 200 million yuan.

Like Ezubao and other alleged internet scammers, Qbao had little actual business to generate profits to pay for its high promises to investors, although the company claimed it had investments in a wide range of assets, from chemical plants to wineries, according to the Nanjing police. It mainly used funds raised from new investors to pay yields to previous ones, Nanjing police said.

Qbao’s business got a lift from the boom in internet-based consumer loan services over the past few years, which provided easy credit access to individual borrowers.

Caixin learned that many of Qbao’s investors borrowed heavily from banks or online micro-lenders to invest in Qbao with the aim of profiting from the interest rate gap. A 26-year-old investor told Caixin that he had applied for seven credit cards to withdraw money for investments in Qbao. With Qbao’s collapse, he is now defaulting on his bank loans.

Before he launched Qbao.com, Zhang was accused of embezzling 4.2 million yuan from investors by fabricating a contract with a South American football club to send Chinese teenagers for soccer training, according to a report by the official Xinhua News Agency in 2003. Zhang was released on bail and managed to pay back the money he owed, said a person close to Zhang.

But in the eyes of many Qbao investors, Zhang is forthright, trustworthy and colorful. He often criticized other entrepreneurs bluntly on social media and never hid his love of alcohol. “Whenever you saw Zhang with a bottle in public event, it was not water but liquor,” said the source.

Several investors told Caixin that they hadn’t expected Qbao’s downfall because the company always paid them on time, sometimes even in advance. “It was so abrupt that we thought it was a fake news,” a Qbao investor said.

But industry analysts said investors’ returns were essential “paper” profits – they appeared only as figures on their Qbao account, and as long as they didn’t withdraw the money, the company didn’t actually have to pay up. The early interest payments were a strategy to beef up investors’ confidence, analysts said.

In addition to the regular deposit and promotion tasks through which investors earned interest and bonuses, Qbao also set up projects to invite investors to become “partners” in its affiliated companies with the promise of lucrative returns. For instance, some investors received more than six times in returns for the money they spent on some of Qbao’s equity investment projects, according to an investor.

The stories of easy profits enticed many investors — from college students to retired workers — to trust their money with Qbao. Even with Zhang’s detention, he still has some loyal followers who have demanded his release.

Company documents outline a vast range of business, such as e-commerce, data technology and industrial production that Qbao has invested in. This include Jiangsu Jixin Glycerol Technology Co., a winery in Tonghua, Jilin province, and properties in Nanjing worth 22 billion yuan, the documents say. The company raised some investors’ concerns by sponsoring the Spanish football club Real Sociedad and trying — though failing — to acquire the gaming section of debt-laden tech giant LeEco.

But Caixin learned that many of the companies in Qbao’s investment portfolio are connected to Zhang and have weak business records.

Zhang has more than 80 companies registered under his name while his wife own another six companies, according to company registration information platform Tianyancha.

Qbao’s shadowy financing activities drew regulators’ attention in 2015. Nanjing authorities raided Qbao’s office and warned the company that it was under investigation for suspected illegal fundraising. But Nanjing authorities stopped short of any actual punishment. Instead, police only hung signs outside Qbao’s office building warning investors to stay away, and ordered local media and businesses to stop cooperating with Qbao.

Under the pressure, Qbao moved its headquarters to Shanghai the following year. The Shanghai authorities also investigated Qbao, and it moved again to Chengdu last year, according to a Shanghai official.

In 2015 and 2016, the central government issued policy documents that tightened regulation on internet financing and ordered local governments to enhance oversight. But city authorities held back from taking action against Qbao out of concern of the public backlash. “Before risks break out, no one wants to stand out to publicly criticize such companies for a crime,” a judge in Shanghai said.

Authorities’ hesitation allowed Qbao to continue to grow and inspire many similar businesses. A number of internet wealth-management and marketing sites copying Qbao’s business model were launched over the past two years.

An office complex in the Jianye district of Nanjing is known for its large number of small online financing companies. A guard of the building told Caixin that as many as 50 wealth-management firms were operating in the building at the same time, and the most short-lived one only existed for seven days.

Shortly after the Qbao incident, another Nanjing-based internet finance company, Xiaosheng Youfu (XSYF), halted business. Last week, some users of XSYF went to the police after they found the offices of XSYF were empty of staff.

Caixin learned that top financial regulators on Dec. 11 held a meeting on clamping down on illegal fundraising. The meeting highlighted the case of Qbao and led to the surrender of Zhang.

The day after Zhang turned himself in, the central bank’s Nanjing branch ordered all commercial banks in Jiangsu province to launch internal inspections for potential loan transactions linked to Qbao and its affiliated firms.

And at Qbao.com, a statement reads, “company owner Zhang has been put in custody for suspicion of illegal fundraising crime. Police are calling on Qbao investors in all regions to report to local public security authorities and cooperate in investigations.”