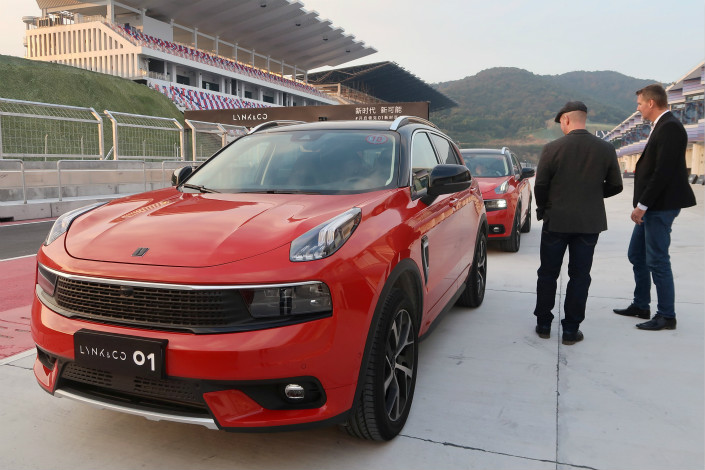 In 2017, Geely sold most of its 1.24 million vehicles in China, thanks in part to strong sales of the Lynk & Co 01 compact SUV (pictured in November). Photo: Visual China

Zhejiang Geely Holding Group Co. Ltd. and its Volvo Cars unit will make Lynk & Co vehicles at Volvo plants in Europe, according to one company executive.

Details of the plan will be unveiled this year, according to Geely CEO An Conghui, who also said the automaker is considering setting up its own factory on the continent in the future.

Geely acquired Sweden’s Volvo in 2010, and launched the new Lynk & Co brand last year as part of its effort to move into foreign markets.

In November, Lynk & Co’s first product — a SUV called the 01 — went on sale in China. The company has said it plans to enter Europe’s electric-vehicle market in 2019 with a hybrid model based on the 01.

It is not immediately clear what kind of Lynk & Co products will be manufactured in Volvo’s two European factories in Sweden and Belgium.

The establishment of the Lynk & Co brand has been part of Geely’s efforts to move up the value chain, and shed the cheap image that consumers associate with Chinese car brands. Chinese automakers have made progress in catching up with their foreign rivals at home in terms of quality and design, but still lack brand recognition overseas.

Geely’s ambition to enter the European market is also the latest of the automaker’s moves overseas. In May, Geely acquired a major stake in Malaysia’s loss-making national carmaker Proton and a controlling stake in its sports car subsidiary Lotus.

An told Caixin that globalization will be the key for the automaker in the future. “We have to compete on the global market,” he said. “Being successful only in the Chinese market is not real success.”

Geely sold a total of 1.24 million units in 2017 — most of them in China — exceeding its goal of 1.1 million, partly boosted by the Lynk & Co 01 model’s good performance in December, according to the company.

An said his company will strive to be one of the world’s 10 largest automakers by 2020, when he expects the company to sell more than 2 million vehicle worldwide.