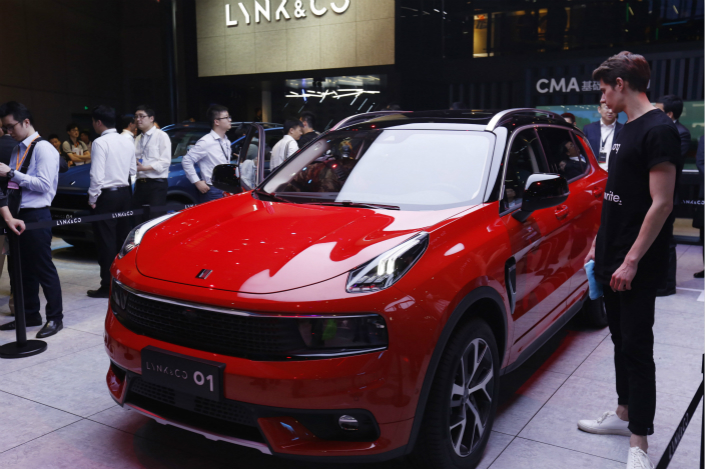 Geely aims to sell 2 million cars worldwide by 2020 and hopes that by then a quarter of its total sales will consist of Lynk & Co vehicles such as the 01 (pictured). Photo: Visual China

Lynk & Co, a new brand established by China’s Geely and its Volvo unit, plans to enter Europe’s electric-vehicle market in 2019.

The announcement comes just as Lynk rolls out its first product anywhere — a SUV for the China market called the 01.

Geely — officially Zhejiang Geely Holding Group Co. Ltd. — will begin producing a hybrid version of the 01 by 2018, and the following year it will offer a variant of the model in the European market, according to Yi Han, a deputy manager for Lynk & Co in China.

Geely acquired Sweden’s Volvo in 2010, and launched the Lynk & Co brand last year as part of its efforts to move into foreign markets. Lynk may also help the company compete in China with similar midrange brands from Volkswagen and General Motors.

Chinese automakers have been catching up with their foreign rivals at home in terms of quality and design, but they still lack brand recognition overseas.

In China, purely electric-battery vehicles are favored by the government and supported with subsidies, whereas European buyers prefer plug-in hybrids, which accounted for 55% of the region’s total electric-vehicle sales last year. Hybrid sales in China were a smaller 23.5% for the same time period.

Geely has been developing electric-vehicle products for years, and in 2014 announced plans to develop hybrid technology with a local company in Hunan province.

Yi said that Lynk & Co has a staff of 100 in Europe currently, which will prepare the company for its coming foray into the continent.

Geely has set a sales target of 2 million units worldwide by 2020, which includes 500,000 Lynk & Co vehicles, according to the company.