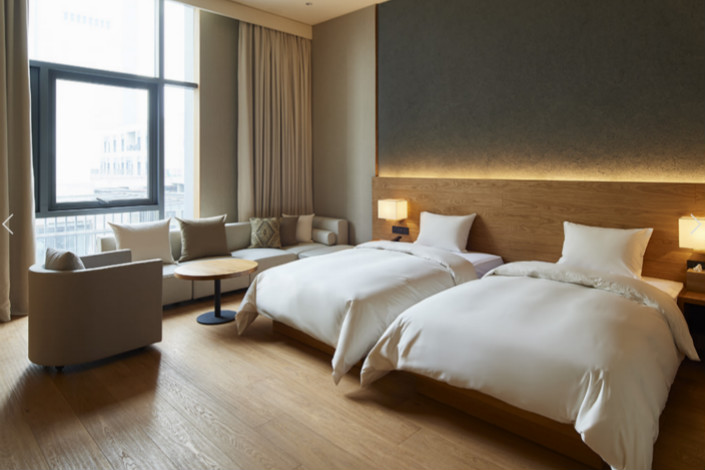 Japanese housewares retailer Muji is bringing its simplicity to accommodation, opening its first hotel in the southern Chinese city of Shenzhen on Thursday.

All 79 rooms have been booked for the first three nights, a Muji Hotel Shenzhen receptionist told Caixin.

But some bristled at the rates.

“I closed the (reservation) webpage after seeing the prices,” said a user on the Twitter-like Sina Weibo who goes by the name FranzJohn.

The room designs follow Muji’s minimalist aesthetic — a concept it calls “anti-gorgeous, anti-cheap” — equipped with the brand’s wooden furniture that uses light and simple hues, and unadorned bedding and toiletries.

The hotel features a gym, a Muji Diner restaurant, a 24-hour library, and three meeting rooms. The operator is a hospitality management unit of the Shenzhen government-owned Shum Yip Group Ltd.

“The goal is to offer great sleep at the right price, provide a space supporting both body and soul while away from home, and connect travellers to local communities,” the company said in a statement.

A second Muji hotel will open in Beijing in March, followed by a third one in Tokyo in the spring of 2019.

Muji entered the China market in 2005, and the country has “played a leading role in raising the proportion of overseas sales and profit,” according to a financial report from Muji owner Ryohin Keikaku Co. Ltd.

Muji said it chose Shenzhen in part because is a city with the sea on two sides and is growing rapidly. It will be among the top 10 Chinese cities for tourists during the upcoming Chinese New Year festival in February, according to a report by the China Association of Travel Services and travel website Tuniu.