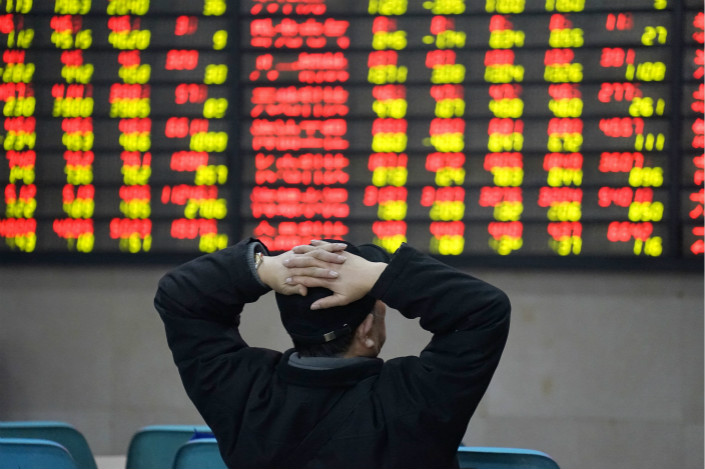 The China Securities Regulatory Commission has barred the country’s brokerages from underwriting privately placed bonds for companies whose key subsidiaries have defaults on their records. Photo: Visual China

The move is the latest sign that the China Securities Regulatory Commission (CSRC) is tightening its grip on the corporate bond market in the wake of several default scandals that undermined investor confidence.

The CSRC barred the country’s brokerages from underwriting privately placed bonds for companies whose key subsidiaries have defaults on their records, and to shelve issuances for companies that have received warnings or fines from stock exchanges or self-regulatory bodies within the last six months, according to a regulation amendment sent to securities firms on Jan. 15. Caixin has seen the document.

A key subsidiary refers to a unit that accounts for more than 30% of its parent company’s total assets, net assets or operating revenues.

The regulation, first drafted three years ago to improve the fundraising method used by small and midsize companies, listed 15 cases in which companies can be barred from selling privately placed bonds, four more than the previous version in 2015 (link in Chinese).

The latest regulation also prohibited companies from using funds raised through privately placed bonds to make financial investments, which analysts say is a shot across the bow of enterprises that put betting on the financial markets ahead of their main businesses.

Source close to the CSRC told Caixin that the amendment will have a limited impact on the market because securities companies have already been following the requirements through window guidance.

Notably, the amendment followed the default of a 1.1 billion yuan privately placed bond from electronics manufacturer Cosun Group., in which the company colluded with its underwriting bank to fabricate loan-guarantee documents so it could issue the bond.